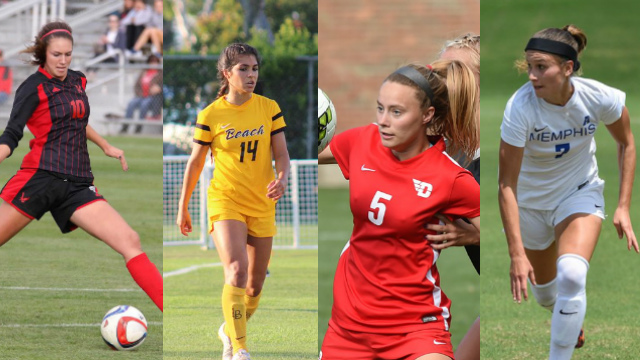 Ahead of the upcoming college season, TopDrawerSoccer.com is giving a brief overview of every conference.

Below is the first group of conferences examined ahead of the 2017 campaign.

What happened in 2016: Hartford capture a share of the regular season league title for the third straight season, but Albany got hot at the right time, defeating the Hawks in the conference tournament game to earn an NCAA bid. Albany lost 4-2 at the hands of Connecticut in the first round.

2017 outlook: A conference that is generally wide open, just about every program will like its chances of competing. Hartford will look to keep its streak alive, while Vermont, New Hampshire, Stony Brook and Albany are plenty capable of pushing on towards the summit. The Hawks did lose significant talent, which should open things up at the top.

What happened in 2016: Connecticut finished the regular season unbeaten in conference play, winning eight of its nine games. Memphis finished a point behind the Huskies, followed by SMU, South Florida, Cincinnati, UCF and Tulsa.

2017 outlook: The Huskies lost their dynamic scoring duo of Rachel Hill and Stephanie Ribeiro, which should give other programs confidence of making a dent in their dominance at the top of the standings. There are enough departures and holes on the field that could leave the Huskies scrambling and open the door. UCF welcomed in a solid recruiting class with a pair of German internationals, while SMU looks to keep trending up in the standings. South Florida features 17 newcomers who will look to hit the ground running and help the Bulls back into contention. If the Huskies are to fall from the perch, Memphis and its returning stable of talent seem like the favorite here to fill the void.

What happened in 2016: Another team pulled away from the pack, as Saint Joseph's put together a 9-0-1 conference record to win regular season honors. But perennial power Dayton went on a Cinderella run, sweeping past St. Joe’s in the tournament final to make the NCAA tournament despite finishing the season with an overall record of 9-10-3.

2017 outlook: There’s a new head coach in charge at Dayton, as Eric Golz was hired to replace the retired Mike Tucker. Golz was previously in charge at Illinois State, and he will look to keep the Flyers at the top. Of course, the Atlantic 10 is one of those wild and unpredictable conferences, and there are programs like Duquesne, Fordham, Saint Louis, George Mason, George Washington, Richmond, La Salle and VCU that can make a run.

What happened in 2016: For the seventh year in a row, Florida Gulf Coast(w) ruled the roost in the Atlantic Sun. Tabby Tindell capped off a memorable career by leading the Eagles to the A-Sun double, before exiting in the first round of the NCAA Tournament against Florida. Lipscomb and Stetson both secured five wins in conference play.

2017 outlook: If this is the year for Florida Gulf Coast(w) to be knocked off the top, it’s this one. While the team must reconfigure its attack, there are pieces left in the form of Nikki Hudson and Ashley Parks. Lipscomb, behind Olivia Doak and Niamh Rollins, will be the best bet to win the conference aside from FCGU, as evidence by the preseason coaches poll. Stetson, Jacksonville and Kennesaw State will aim to play their way into contention.

What happened in 2016: Idaho emerged from the regular season as champions of the Big Sky, boasting a 7-1-2 record in conference play. However, it was a breakthrough for Eastern Washington in the conference tournament, as a win on penalty kicks in the championship game sealed a spot in the NCAA Tournament.

2017 outlook: While Eastern Washington head into the season as preseason favorites – eight of ten coaches in the preseason poll picked them to top the table – the Big Sky can be unpredictable given the scope of travel and challenges of a close conference. Senior Chloe Williams is a big reason why EWU is favored, as the star striker will look to make one more impression on the college landscape. Sacramento State overcame a spotty non-conference schedule to finish in second place, and will look to spring a shock once again. Defender Rachel Leonard did graduate, however, but Sac State does have Mikayla Reed back in the fold.

What happened in 2016: Despite a second-place regular season finish, Liberty went on to win the Big South Championship for the third time in the past four seasons. High Point finished atop the conference through the regular season, but couldn’t translate that into a spot in the NCAA Tournament.

2017 outlook: Per the Big South preseason poll, another two-team race could be on the docket between Liberty and High Point. The Flames have a new head coach looking to lead the title charge, as Nate Norman took over at the end of January 2017. He’ll have a talented team to rely upon, including Jennifer Knoebel and Gabrielle Farrell. High Point will look to mount another challenge, while Campbell’s 40 goals were second best in the league last year.

What happened in 2016: Despite a fourth-place regular season finish, Long Beach State strung together back-to-back wins on home turf to capture the Big West Conference tournament title and a spot in the tournament. UC Irvine were the hard-luck losers, while Cal State Fullerton and Cal State Northridge(w) both finished in the top four of the conference. Northridge were the regular season champions thanks to a 6-1-1 record.

2017 outlook: The four teams that qualified for the conference tournament should all be in the mix towards a top of the table finish again this season. Northridge lost key defender Nicole Thompson to graduation, though senior goalkeeper Jovani McCaskill brings back crucial experience. Long Beach State faces another tough out of conference schedule, lining up against USC, California and UCLA prior to the start of Big West play. Ashley Gonzales and Chloe Froment will both be important pieces once again. UC Irvine and Cal State Fullerton both impressed in conference play a year ago, and have enough returning to be in the thick of things once again. UC Santa Barbara and UC Davis can certainly force their way into the conversation, as the former started strong but couldn’t keep up in conference play last season.

What happened in 2016: It was a fairly competitive year last fall in the CAA, as Northeastern emerged at the top of a league where five teams won at least 10 games overall. They also won the conference tournament, eventually exiting in the first round against Clemson.

2017 outlook: There are plenty of reasons to think that while Northeastern enter the season as favorites, it’s a relatively wide-open regular season and conference race. Drexel returns some impressive firepower in the form of Vanessa Kara, and if it can turn draws into wins this year, could find itself close to first place. Both William & Mary and James Madison have to replace significant departed talent, though if they can, are threats to be in the race. UNC Wilmington’s chances are likely to be driven by how its 12-player recruiting class adjusts.

What happened in 2016: For the third straight season, North Texas won the conference regular season title, but Charlotte emerged as the conference tournament champions after the Mean Green suffered an upset in the semifinals against Florida Atlantic.

2017 outlook: There’s potential for a two-horse race to emerge once the conference slate hits between perennial contenders North Texas and Charlotte. The former obviously has the experience, though Charlotte’s individual standouts, from Martha Thomas to Megan Greene. Targeting the top eight is the minimum for most sides, as that is the field for the conference tournament, whittling down the CUSA from 14. Rice brings back of its 11 starters from the 2016 campaign and will undoubtedly look to toss its name into the regular season race, while Louisiana Tech seeks to prove that defense wins championships. FAU and Western Kentucky have both progressed nicely in the past couple of seasons and will look to continue that momentum in 2017.