Somerset, NJ – Just when you think that you have seen it all in soccer, something occurs that makes you go “hmmmm”  (kudos to Arsenio Hall).  Jersey Express beat Central Jersey Spartans 2-0 at a recent PDL match, but that wasn’t the issue.

The controversy began when Central Jersey tried to insert Brayan Martinez into the game at half-time.  The Express coach, George Vichniakov, became loud and animated.  His objection was that Martinez was not included on the game day roster.  The referee didn’t allow Martinez to enter the game.

Before the game (like I do before every game), I reviewed the press box copy of the USL Official game day roster.  It contains the numbers, positions and names for the 11 starters and 7 substitutes.  If a player is not on this list, the player can’t play in that game regardless, if the player is on the team’s season roster.  When I looked, the only player on this list was back-up goalkeeper Anthony Reichwaldt.  I asked about this and was told that Central Jersey was hoping that Martinez and Chris Christian (Villanova) were coming late because of Memorial Day activities.  It didn’t dawn on me at the time about the game day roster implications.

The game day roster has 4 carbon copies – the white is for the press box; the yellow is for the visiting coach; the pink is for the referee and the gold is for the home coach.  At the bottom of the game day roster, the coach is required to sign the line-up.  I asked Central Jersey’s Coach Sam Nellins, “If you expected Christian and Martinez to show up late, why weren’t they included in the game day roster”?  He responded, “I want to keep that within the team”.

So, the loss can partially be attributed to the coach not having all of his players available.  Additionally, the players not showing up (not just Christian and Martinez) hurt their teammates.  Most importantly, the players that did play – didn’t play well together.

The primary difference between these two teams is that Jersey Express primarily has players that have finished college, but didn’t make it in the higher professional leagues while Central Jersey have constructed their team primarily with college players with their futures ahead of them.

The field is more akin to a pasture with very thick grass.  There is no scoreboard.

The Express tactically try to do 3 things:

Jersey plays physically – at times – more than is necessary.

The first goal was scored by Lebo Pila in the first half.  He made a deep run from his defensive midfield, timing his run to be onside when Hemir Niebles sent a long through ball to Pila’s foot.  Pila drew the goalkeeper out and he slotted the ball past him. 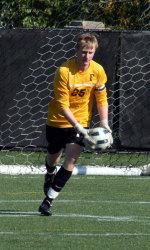 Ryan Meara
The second goal was scored with a snap header from 12 yards by Jerrod Laventure off a Niebles corner kick in the second half.

Joseph Ovenseri doesn’t work very hard up top.  He is prone to lose the ball when it does come to him.

Pila is such a waste of athletic talent.  It’s disappointing that he has never been forced to learn how to play the game, because he is a sensational athlete.  One of many examples, in the first half, left back Michael Konicoff made a run into the attacking 1/3.  With Central Jersey transitioning, Louis Joseph Niouky cycled over to cover the left back position.  Pila didn’t realize that he had to be the sole DM.  Pila doesn’t run off the ball well, his technical skills aren’t tight enough to allow his athleticism to maintain possession.

Very similar to the second goal, Niouky headed a ball just over the cross-bar from a Niebles corner kick early in the first half.  Niouky’s whining is irritating.  He leads with his elbows on high headers.

Shaun Foster (Hofstra) reads the game well.  He doesn’t have blinding speed, but makes up with extraordinary anticipation. Additionally, he doesn’t make mistakes in the back.  In the second half, he made a long dribbling run to the end-line.

Ansger Otto (Stevenson D3) is a good dribbler with agility and quickness.  At the end of the first half, he made a run, ascertained that he couldn’t get to the ball, stopped.  Then, the grass slowed it down and he started running hard again.  But, this hesitation was detrimental and the ball went over the end line.

Andrew Konopelsky (Northeastern) took a 25 yard shot in the first that was just wide.  His passing accuracy was inconsistent.

The primary reason that Central Jersey gets beat is because of team defensive commitment, or lack thereof.  The forwards and some of the midfielders do not consider defensive effort to be required.  At best, they can depend on defending with 6 (and the goalkeeper) – the back 4 and the 2 central midfielders.  It’s correctable, but it hasn’t been corrected.

Ryan Finley (Notre Dame) is a very talented player. He is an anathema for his attacking teammates, because he continuously turns the ball over dribbling into trouble.  Does he not trust his teammates?  In the second half, he was absolutely self-absorbed and a detriment to his team. 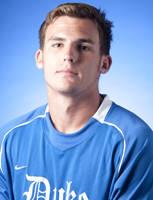 Ryan Finley
In the first half, Johnathan Aguirre (Duke) gave Finley the ball and he made a tremendous cross finding Julian Valerio (William Paterson D3) who hit the shot first time but Meara made a good save on the shot.

The worse situation was that Finley took a long free kick in the first half.  When the play broke down, he just stood there while the Express ran past him with the Spartan defenders not yet back causing 1 player to mark 4.  Luckily, the Spartans didn’t get the ball up the field quickly enough.  This lackadaisical transition defense by Finley is unacceptable.

The other forward Valerio is a superstar of Messi-proportion – in his own mind.  He turns the ball over frequently though he has a nice first step and is an adequate dribbler.  The problem is that he makes poor decisions in a risk/ability equation; i.e., he takes more risks than his ability can cover.  Valerio hangs his corner kicks and he dislikes physical confrontations.  It got so bad in the second half, that whenever Valerio touched the ball, it was predestined to be a turnover.

With the duo of Finley and Valerio (aka Team Selfish), it shouldn’t be a surprise that the team breaks down in the final third.

Antoine Hoppenot (Princeton) is a slick player, slowing down, accelerating.  He works very hard and he’s willing to take on a defender (or 2 or 3).  Early in the second half, he was injured and had to come out to have his ankle re-taped (a substitution would have been a luxury, here).  He was able to come back after a few minutes.  He absolutely lost his mind after a series of calls went against him. I agree with his position, but this referee is apt to throw a yellow when confronted with logic and reason.

The defensive balance is weak.  For example, in the first half, Christopher Benedict (Princeton) didn’t realize this weakness and myopically covered only his own position.  In the second half, Benedict took too long to release forward, hampering the attack.

Goalkeeper Rafael Diaz (St.t John’s(m)) is quick but small.  He has difficulty covering the top corner of the far post.  I believe that Meara would have prevented the second goal if he was the keeper for Central Jersey.

Marc Cintron (Providence) had a miserable first half playing left midfield.  When he played right midfield in the second half, he was much better.  Cintron was confident that he could beat Konicoff on the dribble in the second half and he terrorized him.  Cintron’s crosses were inconsistent.  If Cintron breaks into the middle of the field, he panics with defenders coming at him from all directions.

Aguirre and Kyle McCarthy (Villanova) work well on both sides of the ball.  McCarthy may be the better defender with his height, but Aguirre is the key for spraying the ball around.  I’d like to see Aguirre take on more attacking direction and leadership when the play is breaking down in front of him.  I guess the same could be said of Hoppenot – given that he’s going to be a senior in the fall.

Ryan Whalen (Villanova) played well in the back.  He made a fine tackle on Robert Youhill (Hofstra) in the first half.
Headlines
College Rankings HQ
View all rankings >>