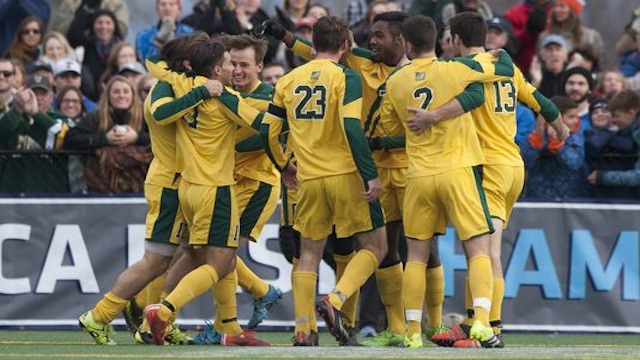 There was no question about the king of the A-10 castle in 2015. Dayton swept through the postseason tourney and took an automatic qualifying spot before bowing out of the NCAA tourney in the second round. That run was propelled in large part by Amass Amankona, one of the most underrated players in the country over the course of his career and a national player of the year semifinalist in 2015. Now, though, Amankona is gone, leaving a smoking crater in his wake for the rest of the team to fill in. The good news is Dayton should be back up with a talented returning cast, led by senior leader James Haupt.

That means it’s likely someone closes the gap, but where that challenge comes from is unclear. Saint Louis lost a stellar senior class that included three MLS draft picks, and while they landed solid freshmen  who are now sophomores like Anthony Brown and Lennart Hein, it’s impossible to miss the elephant in the room of the missing experience.

The mass in the middle of the conference is real, and it should be interesting to see who breaks out of the pack to join the top couple seeds in the 2016 conference tourney. George Washington was the pleasant surprise of the conference last year and while they were hit with some losses, they should be in the picture again. The same goes for Fordham, Duquesne, Rhode Island and UMass. This conference should be wide open this year, so it’s anyone’s game.

An interesting yarn to watch is the introduction of a new coach at La Salle. The program only won six games last year, and newly appointed Rob Irvine from Keane could alter the paradigm somewhat in the league. Something to watch out for.

What does it say about the difficulty of a conference that has a seven-win team in the cellar? That’s precisely what happened to Cincinnati in 2015 after entering the league slate with a winning record. That speaks to the overall depth and difficulty from the top to the bottom in the AAC, which is usually one of the more underrated conferences in the country.

This year should feature another fascinating battle for the top between the league’s traditional Big Three: SMU, South Florida and UConn. After some uncharacteristic down years, SMU is back at the pinnacle and looks to keep its pole position with almost every major contributor back. That includes Mauro Cichero, who will get looks as the national player of the year with another strong season. UConn brings back a host of talent as well, led by the fearsome duo of Kwame Awuah and Jake Nerwinski. USF, meanwhile, loses Brendan Hines-Ike but retains Nazeem Bartman and Lindo Mfeka, who could be the best midfielder in the conference.

Tulsa was a threat in 2015 and has an encouraging young nucleus to build around. The loss of Bradley Bourgeois will sting, but there’s a good amount of skill coming up behind him. The question for UCF is if the Knights can avoid taking a step back without current pro Hadji Barry leading the line. Cincinnati was devastated by graduation and will have to hold off Temple, which had a quality underclassman group come up in 2015 and take some lumps before pulling off a 10-win season.

The last couple years have been a wonderland of diminishing returns for UMBC, which became the first America East program in history to make the College Cup in 2014. The Retrievers fell just short, but it illustrated one of the great underdog stories in NCAA soccer history. The 2015 season wasn’t quite as charmed, and the loss of another class that played a role in that run could hurt UMBC even more. They’ll be good every year, but you don’t just replace a defender like Malcolm Harris, either.

Albany nipped UMBC for the conference title in 2015, and they have a veritable feast of returners that should make them just as difficult to break down in 2016. Leading that charge is Brazilian stud Afonso Pinheiro, probably the best player in the country. Stop him and stop Albany, but that’s something no league team has done very well. UMBC has some quality back as well, led by midfield general Gregg Hauck, but can they compete for the top spot? The tough thing about this conference is that it’s so even. There are no patsies here to pad your win/loss record.

Indeed, five teams finished within one point of one another in the final conference standings, including three teams with 3-3-1 records and five who recorded 10-win seasons. Vermont took the automatic spot in the dance by winning the conference tourney with one of those 3-3-1 records, and they should be even better in 2016 with some key returners in the fray. Indeed, only two players on the first team all-America East team in 2015 graduated, so expect to see each of the key teams from a year ago back in the mixer this time around.

Florida Gulf Coast is driving the bus in the A-Sun these days. The Eagles have had a remarkable string of recruiting triumphs in recent years, and they’ve been, on paper anyway, the most talented team in the conference for the past couple seasons. That didn’t stop Gordon Wild-led USC Upstate from scoring the OT upset in the conference tourney semis and North Florida from winning the thing for the NCAA bid, though.

Nobody brings back the same level talent that FGCU does, so this should be the Eagles’ league to lose in 2016 with Miguel Jaime, Albert Ruiz and Dylan Sacramento leading the charge. North Florida will be in the mix again, but nobody lost a more integral piece than midfielder Alex Morrell, who made NF go. Lipscomb has made strides and was the only other league team with a winning record in 2015. Logan Paynter and Ivan Alvarado have another year of seasoning, which can only help.

It seems almost inevitable that USC Upstate will take a step back in 2015 while it figures out how to replace Wild. Inarguably the conference’s best player last year, Wild transferred to national title contender Maryland in the offseason and will probably be the Terps best scoring threat. That USC Upstate had him for even a year was a recruiting coup the likes of which the country hasn’t seen in a long time.

Notable newcomers NJIT moved over from the Sun Belt to give the A-Sun seven teams for the 2016 season. The Highlanders are looking to improve on a five-win 2015, but the road trips will be notably more difficult than what they’re used to. NJIT only went south of D.C. once last year in the Sun Belt. How they cope with the time spent on the road will dictate their season.