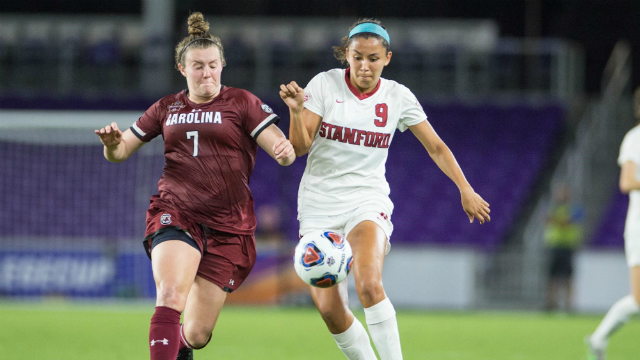 The 2019 NWSL Draft is around the corner, with the nine teams in the league looking to add to their rosters on Thursday.

It remains unclear whether or not Tierna Davidson will enter the draft despite having a year of eligibility left. While that is yet to be determined, for the purposes of the rankings TDS is keeping her in the mix.

Not included are players expected to head abroad that aren't on the draft list, including Bunny Shaw (Tennessee) and Natalia Kuikka (Florida State). With those factors in mind, here is the top 10 pro prospects for the NWSL Draft among expected eligible players.

A highly-regarded youth prospect heading into her Carolina career, Bailey finished her time strong at Chapel Hill after suffering a torn ACL during her freshman campaign. A central midfield connector with good touch and technique, she can navigate through traffic and control the ball in tight spaces. She also popped up to score big goals in the team’s NCAA tournament run and was masterful in the semifinal win against Georgetown. Her issue, like other central midfielders on the board, is if they can compete enough athletically in the league to factor.

Pruitt took a massive step forward from a production perspective during her senior season at USC, nearly hitting double digit totals in goals and assists (12 and 9 respectively). Perhaps the most classic No. 9 in the draft, she’s not quite the pacey, athletic forward that others in the class bring to the table. But she showed the ability to setup teammates this season and gets into good positions in front of goal that some team is sure to snap her up.

Part of USC’s resurgence and 2016 title-winning season, the talented central defender makes up what she lacks in physical presence with leadership, a tremendous work rate and positioning sense. While about how she matches up against some of the speedy attackers in the pro game, Prisock’s a fierce competitor that’s going to do her utmost to win a roster spot and earn some minutes this season.

Another fascinating draft case, the Overland Park, Kansas native has been one of the most statistically dominant attackers over the past four years. While there’s no doubt that some of Kizer’s goals came against some lesser opponents, she’s been consistent every season at Ole Miss and will surely get a chance in the NWSL somewhere. A versatile player that can come in and play just about any attacking position, she could be one of the first attackers to come off the board.

A brilliant soccer player that pulled the strings in the Stanford attack over the past four seasons, DiBiasi’s enjoyed a stellar career and now eyes up a chance at the next level. Good with the ball and able to play the killer pass, DiBiasi may be a step too slow for the NWSL, with a move to Europe likely to see her enjoy more opportunities and make the most of her skill set.

The 2015 national champ, Ogle’s long been a fixture at the U.S. youth national team levels, redshirting the 2016 season for the Under-20 World Cup. Extremely impressive under pressure, she’s got the soccer part down when projecting her pro prospects. Like many on this list, her success and ceiling could boil down to how the physical part comes into play. If she plays in a double pivot, that is sure to play to her strengths, though if she grows into the challenge of pro soccer and can cover ground, she could be a runaway success.

Providing leadership and intangibles that compliments Ashley’s work rate and defensive commitment, Ashley’s an outside back prospect that could step in to provide minutes as a rookie. Her ceiling as a pro will be dictated by how she much she can improve with the ball and in combination play going forward, as she has the physical part of a two-way fullback covered.

A local product of the Bay Area that’s gone on to carve out a successful career on the Farm, the only knock on McGrady heading into draft season is her battles with injuries over the past two seasons. She has the motor and skill to be an excellent left back and is a name to watch for the full U.S. women’s national team after the 2019 World Cup.

An outsider for the U.S. World Cup squad, Mace played center back, forward and as a left back at UCLA. While injuries cropped up from time-to-time while in school, she has the pace and athleticism to be at minimum, a solid player in the NWSL. Her ceiling rises when she hones in on a position, if she stays healthy and can clean things up with the ball.

While nothing has been confirmed about Davidson’s eligibility for this draft, she's included as the top prospect for the purposes of this exercise. A superb central defensive prospect, she can cash in and look to make the World Cup team (or is already promised a spot) while beginning her professional career with an NWSL club – likely the Chicago Red Stars.