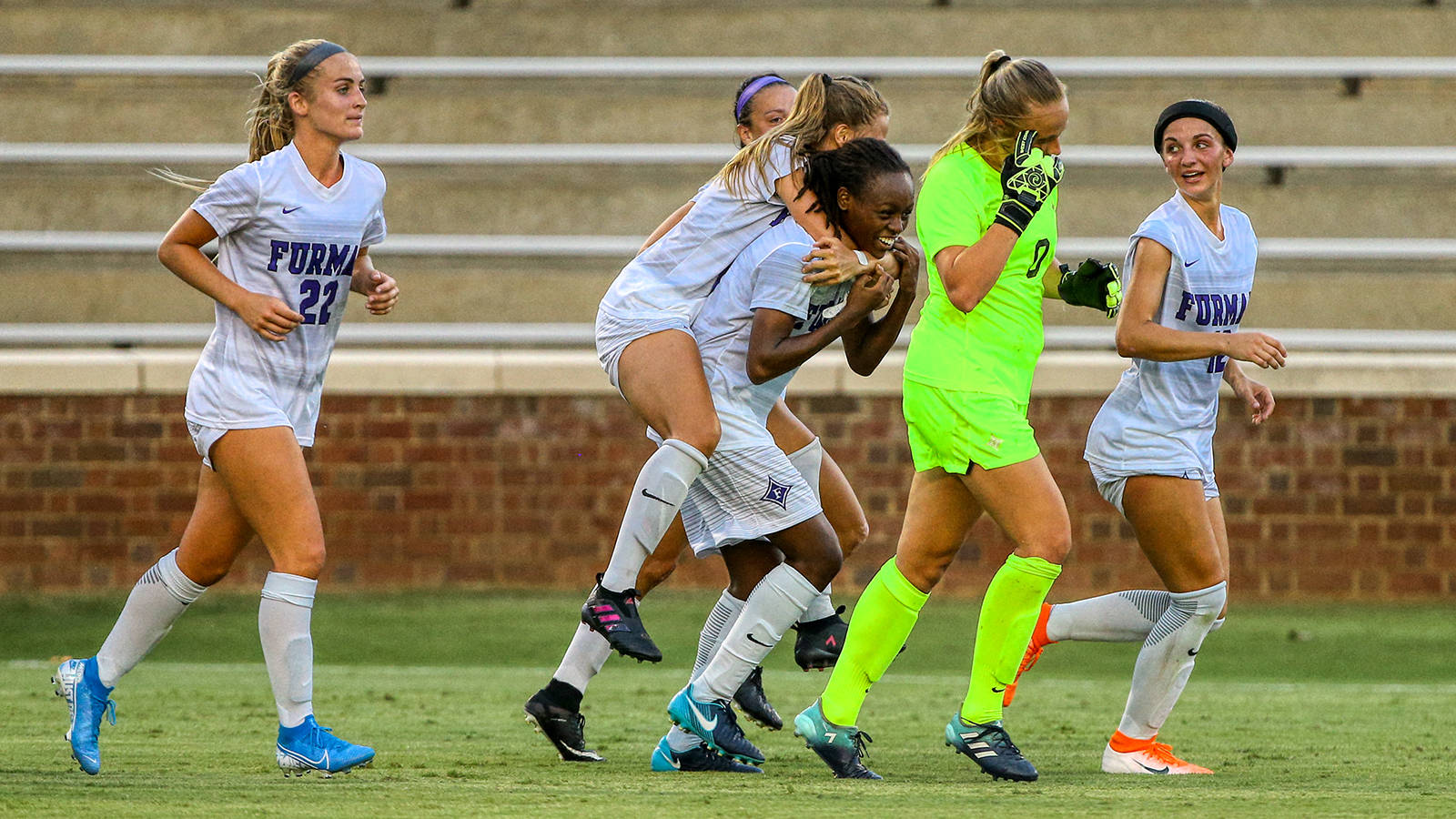 With the Coronavirus set to impact college athletics in the coming months, TDS will track all news and alterations as they are announced or reported related to college soccer programs of all levels.

See below for any news items related to seasons being canceled or altered in college soccer for the 2020 season and beyond.

Please send any tips or news as they are announced to editor@topdrawersoccer.com.

-- Mountain West postpones the fall sports season including women's soccer. The conference will discuss the possibility of playing in the spring at a later date.

-- Among the Division I conferences to postpone the season this week include the Northeast Conference and Big West. It appears as though the ACC will try and play some semblance of a fall season.

--American Athletic Conference delays start of the season until Sept. 1.

-- The Southwestern Athletic Conference (SWAC) is the latest Division I conference to push back the fall sports season to the Spring.

--While no decision has come from the Colonial Athletic Association, Hofstra and William & Mary announced that fall sports are suspended. The former indicated a willingness to have fall sports compete in the spring, while it may not be the case at William & Mary. Other CAA programs have postponed or cancelled fall sports: Towson, Delaware and Drexel.

--The America East and Atlantic 10 announced the decision on July 17 that the fall athletics season will officially be postponed. The Atlantic 10 release specifically outlines a plan to try and play some kind of competitive schedule within the conference if conditions allow.

“This was not an easy conclusion for our membership to reach but it was made with care and diligence and with health and safety as the highest priority," America East Commissioner Amy Huchthausen said in a statement. "For the last several months, we have been working extensively with our membership to prepare for the fall sports season, including developing health and safety protocols, revising schedules and creating contingency plans.

"We have remained optimistic that we could safely conduct a fall sports season, however, there are several external factors outside of our institutions’ control that will limit and disrupt our ability to deliver our student-athletes an experience they deserve. While several outstanding issues and questions remain, we are hopeful that creative thinking and solutions will emerge in concert with improved measures to reduce the risk associated with COVID-19 as the academic year unfolds.”

--The MAAC, which had previously announced that it wouldn't begin fall sports until at least mid-September, put out a statement on July 17, indicated that it would play conference games only as well.

--No fall sports will take place in the WCC until at least September24, the conference announced on July 16.

"While difficult, this is a necessary move to ensure we are providing the safest environment for our programs to compete,” West Coast Conference Commissioner Gloria Nevarez said in a statement. “We have worked on plans for a variety of circumstances and believe, with our actions guided by information and science, this is the responsible decision at this time. We will continue to evaluate our best path moving forward with the health and safety of everyone involved as the guiding principle of our discussions.”

--It was announced on July 16 that the Big East would play a conference-only schedule, joining the Big Ten and Pac-12 with that plan for fall sports.

--The Central Atlantic Collegiate Conference, a 14-member league in Division II, announced that inter-collegiate competition will not take place in the fall. The aim for fall sports is to ideally host some kind of competition in the spring.

"This decision was not made lightly," CACC Commissioner Dan Mara said in a statement. "Our presidents and athletic directors have had extensive conversations about what is the best plan of action for the safety and welfare of student-athletes, coaches and staff. A decision regarding how student-athletes can practice and prepare with their coaches during the fall semester is forthcoming."

--The Patriot League announced that there would be no athletics in the fall, with potential exemptions made for Army and Navy.

--Washington and Lee, a school in Southwest Virginia, announced that they would not play fall sports.

--Late on Friday, July 10, the Pac-12 announced that it would play a conference-only model for the 2020 season, should a fall campaign be viable.

--There will be no Division III season in the New England Small College Athletic Conference, the league announced on Friday. Williams, Bowdoin and Amherst had already announced plans to not play soccer this fall.

--The California Community College Athletic Association announced plans to move all fall sports to the spring.

“I know I speak for the entire CCCAA Board that moving Fall athletics to Spring 2021 is a huge disappointment,” Dr. Erika Endrijonas, Board Chair and President of Pasadena City College, said in the press release. “However, the need to keep our student-athletes and the amazing coaches and athletic trainers who work with them safe was simply the only option available with the virus spiraling out of control across the state.”

--Another Division III Conference has weighed in. The Middle Atlantic Conference, based in Pennsylvania, will try and have fall sports this fall. However, no competition will begin before September 18.

--The Big Ten announced on July 9 that it would play a conference-only schedule for fall sports, including men's and women's soccer, if competition is possible.

--In the ACC, Olympic sports won't begin play until September 1 at the earliest.

--On Wednesday, July 8, the Ivy League announced that fall sports will be postponed, with spring cited as a possible timeline for fall sports to take place.

"All ODAC members have agreed to a consistent start date for all regular season play, establishing Friday, September 11, 2020 as the first allowable date of competition for all fall sports. This adjustment allows member institutions adequate time to welcome student-athletes to campus and properly resocialize with a focus on a safe return to competition. Teams are free to schedule non-conference competition on an institutional basis when open dates are available in their respective schedules."

--Angelina College, a junior college in East Texas, announced that the men's and women's soccer programs would be suspended for the 2020 season.

--The Centennial Conference, a Division III league that features schools in Pennsylvania and Maryland, has suspended all fall sports for the time being. Below is part of their statement released on Wednesday, July 7.

"Given health and other related concerns, the Centennial Conference Presidents Council has decided to suspend any inter-collegiate competition for sports scheduled for the fall semester. The presidents will reevaluate this decision by the end of September, based on work to be done by the Conference to assess sports-specific activities and the experiences on the schools’ campuses. The presidents have determined football will not be played in the fall. The Conference will also explore the possibility of shifting certain fall sports, including football, to the spring."

Haverford, one of the schools in the conference, announced that fall athletics will be canceled for the fall.

--Amherst College became the latest program to cancel its 2020 soccer seasons. All fall athletics have been canceled at the Division III school. They weren't the only school to make that announcement, as Swarthmore suspended fall sports for 2020 on Tuesday.

--Two Division III schools in the New England Small College Athletic Association have canceled fall athletics. Williams, located in Massachusetts made the announcement earlier this week, joining Bowdoin College in Maine, which made the same announcement on June 22. The College of New Jersey canceled its men's and women's soccer seasons.

--The Metro Atlantic Athletic Conference announced on June 29 that fall athletics won't begin until September 11 at the earliest.

--Having already announced a vastly different schedule for the fall, the CAA confirmed that every team will compete in the 2020 conference championships. The women's soccer tournament will begin the weekend of October 30 and conclude on November 6 and 8, while the men's soccer tournament will begin November 6 and 8 and conclude the following weekend of the 13-15.

--The Patriot League has announced guidance for fall sports. Schedules are to be setup that prevent overnight trips, flying and staying in hotels, among notable outlines.

--The Big East announced this week that they will regionalize schedules for conference play in the fall. Teams in each division will play each other twice. Georgetown, Providence, St. John’s, Seton Hall, Villanova and incoming BIG EAST member Connecticut will be in the East; in the Midwest will be Butler, Creighton, DePaul, Marquette and Xavier.

--In the wake of the Mountain West's virtual Board of Directors meeting, the women's soccer tournament will be canceled for just the 2020-21 season. The conference's automatic bid will go to the regular season winner.

--On May 29, North Carolina released its roadmap for fall athletics, with mid-July the target date for student athletes to return to campus.

--In the Colonial Athletic Association, an "extreme flexibility plan" has been announced for Olympic Sports, which includes men's and women's soccer. The complete format has yet to be determined.

--The Big Sky announced that it would play its nine-game regular season as scheduled. However, there will be no conference tournament, and assuming that an NCAA tournament is a possibility, the conference's automatic bid will go to the regular season champion.

--The Atlantic 10 will regionalize its conference schedule for men's and women's soccer and cut down the number of conference games by 25%. In addition, the conference tournament will be down-sized for the 2020 season to four teams.

--Citing cost-control measures, the Southern Conference is reducing the size of its men's and women's soccer conference tournament championships to four teams in each field.

--All sports have been cancelled for the fall in the Division II California Collegiate Athletic Association, which consists of 12 programs in the California State University system.

--According to a report in the USA Today, the Mid-America Conference won't hold a championship for men's or women's soccer for the next four years, with the tournament automatic bid going to the regular season champion.

--The Big South will also reduce its championship fields in men's and women's soccer to just four teams.

--Appalachian State dropped its men's soccer program, leaving the Sun Belt Conference with just five programs on the men's side.