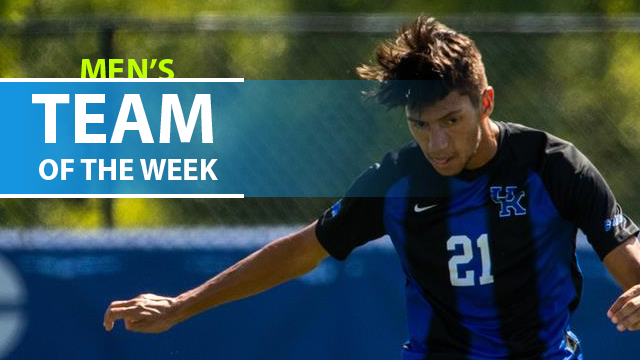 After a slow start to the season, Kalil Elmedkhar is picking up the pace.

A huge part of Kentucky's dazzling 2018 campaign, Elmedkhar was at the heart of two wins for UK this past week.

Last Tuesday, the Wildcats welcomed Bowling Green to Lexington. ElMedkhar assisted on the game-winning goal, and then notched an insurance tally in a 2-0 victory.

On Saturday facing a tough Coastal Carolina squad, ElMedkhar held his nerve in the 21st minute, scoring the winning goal in a closely contested 1-0 win.

▶️ 2019 @ConferenceUSA Preseason Co-Offensive Player of the Year Kalil ElMedkhar nets his fourth goal of the season to put the Cats on top in the first half. #WeAreUK pic.twitter.com/Ur155uliTO

GK Ian Bramblett, Navy – Now off to a 9-0 start, Navy’s defense is a big part of their success so far. Bramblett back-stopped two shutouts last week against Liberty and Loyola (MD).

D Ethan Bartlow, Washington – The defender scored a free kick to win a tight, 1-0 match against Portland. Bartlow logged the full 90 minutes in the win.

D Brett St. Martin, Maryland – St. Martin’s played his way into a starting role for the Terps and played a big part in a win and a draw last week. He scored the winning goal from a set piece in dying minutes of the second overtime of a 1-0 win. Playing the full 110 minutes against Wisconsin, he helped the Terps pick up a 0-0 draw on the road.

D Clayton Torr, Cal State Fullerton – A transfer in from Tafts, Torr enjoyed an excellent week. He helped pick up a 1-1 draw against Loyola Marymount and a 1-0 win against California Baptist.

M Kalil Elmedkhar, Kentucky – ElMedkhar now has scored in four straight games after failing to find the back of the net in the opening four. He’s coming into form as the schedule picks up the pace.

M Gabriel Costa, SMU – It was a huge performance from Costa, who scored two goals and chipped in two assists in a 5-1 road win against Tulsa.

M Joe Brito, Charlotte – In two wins over the past week, Brito accounted for the winners in both. He tallied in a 3-2 overtime win against Wofford, and then opened the scoring over the weekend in a comfortable 4-0 defeat of South Carolina.

M Brandon Williamson, Duke – Trailing 2-0 on the road against ACC foes North Carolina, Williamson setup a goal to claw one back and eventually tied the game in the second half. That set the table for freshman Scotty Taylor to nab the winning goal in the 63rd minute.

F Antonio Colacci, New Hampshire – It’s been a big season for the senior midfielder so far, and that continued in the past week. He scored two goals and had two assists as New Hampshire beat Quinnipiac and Binghamton.

F Rodney Michael, UC Santa Barbara – Michael was on song last week, setting up a goal in a win over Pacific and then rising to the occasion against Stanford on Saturday. He scored a spectacular goal to put UCSB up 3-2 in the second half, although the Cardinal secured a 3-3 draw on the night.

F Josh Luchini, Lehigh – The sophomore went on a scoring spree over the past week. He nabbed the winner in a 2-1 victory over Penn on Tuesday, and then added a hat trick versus Boston University over the weekend.