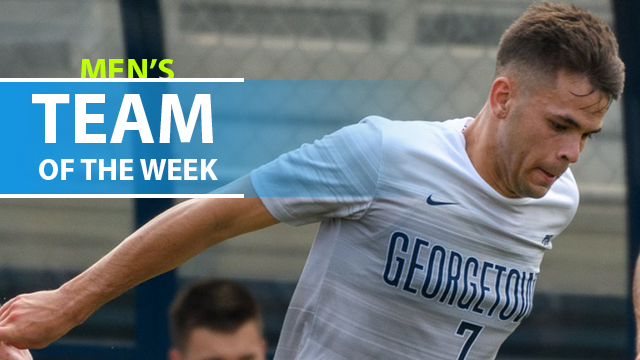 Few teams in the country are as hot as Georgetown.

Winners of six straight games, the Hoyas picked up one of the best wins of the season last week, going on the road and beating St. John’s by a 3-0 score on Wednesday. They pulled the same score line off against Marquette back at home on Saturday.

Junior midfielder Jacob Montes was a big part of that success. He opened the scoring against St. John’s with a fierce free kick in the first half in what turned out to be the winning goal. In Saturday’s victory over Marquette, he also went on a mazy run that forced an own goal, the first of the game. Montes setup teammate Derek Dodson for the final tally of the game as well.

Check out some of the other impressive performances from the past week of action in men’s Division I soccer.

D Pierre Cayet, Temple – The French defender grabbed a pair of goals, as the Owls won both games last week. That included the opener in a 2-1 win against Louisville, a huge boost to the team’s NCAA tournament chances. Cayet then bagged the winner in a 2-1 conference win over UConn over the weekend.

D Johannes Bergmann, Maryland – With a goal and playing every minute in two shutouts, the German defender helped lift the Terps to a pair of wins as they look to keep pace in the Big Ten.

M Paulo Lima, Providence – The Friars remain on the bubble for an at-large bid, but two wins last week helped keep them in the mix. Lima scored twice, including an acrobatic winner in overtime against Creighton. He also setup the winning goal in a 2-0 win over Villanova earlier in the week.

M Joel Walker, Oregon State – As the Beavers look to keep their NCAA tournament hopes alive, Walker scored a goal and had two assists in a 3-2 win against UCLA over the weekend.

M Aidan Morris, Indiana – Normally more of a deep-lying midfielder that’s involved in build up play but less so in the final third, Morris scored and added two assists in a 3-0 win against Rutgers.

M Jacob Montes, Georgetown – With his goal against St. John’s, Montes tops the Hoyas with seven tallies on the season, a new career high after failing to net in 2018. The combination of him, Derek Dodson and Achara will be critical as Georgetown seeks a return to the College Cup.

F Dominick Faletto, Houston Baptist – The senior scored four times in a wild 4-3 road win against Grand Canyon. Two games and two wins for the Huskies were huge away from home as they looked to secure a spot in the WAC tournament.

F Blake Bodily, Washington – The junior’s high-flying season continued last week on UW’s swing to the south. He scored two goals against San Diego State on Sunday after bagging the winner in a narrow 1-0 win against UCLA last Thursday.

F Alexander Dexter, Pittsburgh – Down 3-0 at home to Duke, Pitt pulled off one of the best comebacks of the entire college campaign with a 4-3 victory. Dexter setup the first two goals that cut into the lead, before finding the winner by slotting home a rebound with under five minutes left.

F Garrett McLaughlin, SMU – SMU’s offense had quite the week, scoring 12 goals across two games. McLaughlin nabbed five of his own, plus an assist, in a 7-1 drubbing of Cincinnati.