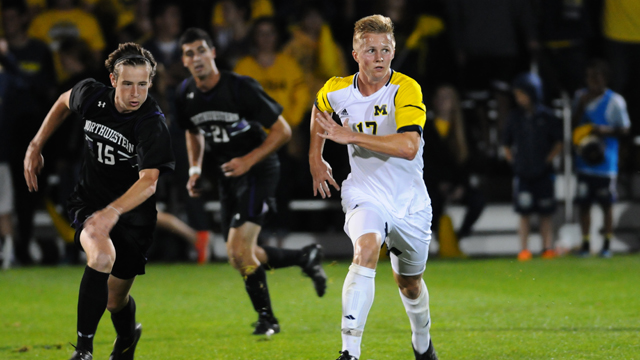 Having the right players step up at the right time can make a huge difference on a season at any level of soccer. In the abbreviated slate of the college game, those moments are even more frequent. This past week, a number of players answered the call whether it was stopping a penalty kick in the final minute or scoring three goals against a rival.

Those types of performances helped some players secure a spot on this edition of the TDS Team of the Week.

GK Colin Webb, Indiana – The sophomore made stopped a penalty kick in the final minute of the game against Ohio State to help the Hoosiers hold onto a 2-1 win. He recorded six saves during the midweek victory over Louisville.

D Jordan Murrell, Syracuse – Scored an Olimpico goal against Albany. The senior defender from Canada followed that up with two assists in a 3-1 win over Wake Forest over the weekend.

D Kelvin Madzongwe, Boston – The senior defender recorded an assist in Boston’s 2-0 win over Lehigh. He was also a key piece of the defense in the 1-0 win over Holy Cross last week.

M Mael Corboz, Maryland – The Rutgers transfer had his best week of the season with game-winning goals against both VCU and Penn State. Corboz finished the week with three goals from the two games.

M Eric Bird, Virginia – The senior midfielder scored the game-winning goals in 1-0 wins over George Mason and Duke. They were the second and third goals of the season for the Virginia standout.

M Jordan Aidoud, Valparaiso – The French midfielder finished the week with three goals and an assist as he led Valpo to a pair of wins. Aidoud had the opening tally in a 3-1 win against IUPUI. He scored twice in a 5-2 win over Wright State.

F Andy Craven, North Carolina – Craven scored twice against Virginia Tech to lead the effort in a 5-0 romp. He also scored in the 3-0 win over Campbell on Tuesday.

F Kyle Parker, Charlotte – Parker was a key piece of the 49ers attack in their remarkable 4-3 win over FIU over the weekend. Parked finished the game with a goal and two assists as Charlotte snagged the win after trailing by three goals at half.

F Colin McAtee, Michigan – McAtee scored a hat trick against Notre Dame to lead Michigan to the upset victory over the Irish. He scored his sixth goal of the season on Saturday in a 3-0 win over Rutgers.

F Zach Batteer, Stanford – Batteer scored the lone goal for the Cardinal in a 1-1 draw against UCLA. He also scored the game-winner against San Diego State.