Navy looking to maintain success in 2014 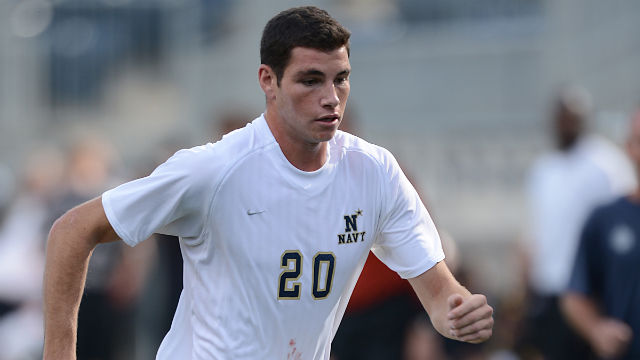 The Midshipmen rattled off 15 straight wins, a run that included a perfect Patriot League regular season record, a conference tournament title, and a 3-0 win in the first round of the NCAA tournament against VCU. 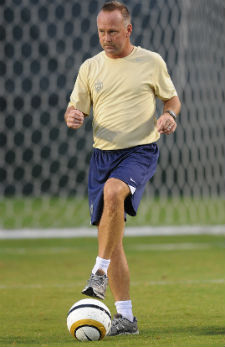 Digging deeper, however, the program’s success shouldn’t be a surprise. Head coach Dave Brandt is no stranger to winning, having led Messiah to six Division III national titles. He’s the current winningest active coach in men’s soccer, and is eager to maintain the momentum of last fall.

“We’ve been given a platform now; we need to build on that success,” Brandt told TopDrawerSoccer.com. “It is tight and competitive in Division I, at the same time I’m saying that, my approach is very much system and philosophy-oriented, not player oriented.

"That’s not a knock towards our players – we need good players and we lost a significant senior class – but we have good players to fill those spots, I like our ’14 class, we’re going to get good players in, and the success needs to continue. I’m against the idea, for our program, of up one year, down the next, I’m philosophically opposed to rebuilding I suppose I should say, and I think Messiah’s deal lives that out. We reload, we don’t rebuild.”

Last fall marked Brandt’s fifth season in charge of Navy, and the 16-4-2 record was by far his best in charge in Annapolis. It didn’t start off that way however. A 1-2-2 start to the campaign had some of the players thinking that it would be another roller coast campaign.

After a September 14 loss at High Point a group of about ten players dropped in on Brandt’s office and said “enough’s enough.” The experience-laden team put its foot down, and after a September 17 overtime loss against nationally ranked UMBC, rattled off 15 straight wins.

“Collectively as a group we decided we weren’t going to lose anymore,” rising senior defender Joseph Greenspan said. “We had enough of being good enough on paper and not coming through on the real thing.”

A lot of that success came down to the foundation of the group of seniors, with as many as six in the starting lineup at various points of the season. The leadership showed by that group and chemistry on the field played a pivotal role in triggering the run.

Navy also could lean on the defensive tandem of Joseph Greenspan and Derek Vogel. Listed at 6-foot-6 and 6-foot-4 respectively, the hulking center back pair isn’t your stereotypical partnership – they are combative and physical in the air, but technically adept at playing in a demanding system that Brandt runs.

“I’m very big on what I would call penetration on the ground,” he said. “That’s our game – playing through defenders, on the ground. I think it’s a technical, fast, probably risky, courageous style that I want our guys to play. Players come to me and would rather play square and I want them to play through the heart of the defense. They might want to bail in the air, I want them to play to a second target’s feet, on the ground. Of course there’s a risk of giving the ball up, it’s riskier, and we admit that. I challenge them to do it, and I think in the end it’s a fun and exciting style to play.”

Added Vogel: “Just from the tactical [perspective] and my vision on the field, I’m looking for things that I never knew existed before. When you hit those things, it opens up the entire field. I think it’s something I haven’t done on any level, something that Brandt has seen and we do and practice every day. It’s surprising that no one tries to do that.”

In the experience-heavy world of college soccer, this fall’s task of a repeat success is certain to be an uphill battle. Midfielders Dave Arnold, Martin Sanchez and Guy Skord, outside backs Nick Dubee and Blake Busse, along with starting goalkeeper Gavin Snyder all graduated.

Rising senior Geoff Fries isn’t worried about that however, and recognized the importance of the spring campaign in helping set the tone to maintain last fall’s momentum.

“Cool thing about our team is we love to play deep, so we do have guys that did get some minutes when they were younger,” he said. “We’ve got to take advantage of the spring, we’re given five games so a bunch of the younger guys we’ll try to get them in as much as possible, get them up to speed. It’s tough, but I think with the talent we have coming in, and the freshmen we had this year, moving forward, and the way that our team is built, I think it allows us to have some sustained success.”

The spring season has been a little threadbare as a result in terms of players available, as the fall’s incoming crop of players have obviously not yet joined the team yet. Regardless of that, the team posted an encouraging 2-1-2 record, including a 2-1 win against NC State on the road.

And while there is a significant drain of experience, returning players bring back plenty. Fries was named team captain, and pair of Vogel and Greenspan provide talent at the back.

Come the fall, the tandem could be in the running for one of the best defensive duos in DI men’s soccer, a foundation every coach would love to have. This fall will also mark the second year in a row they start together. 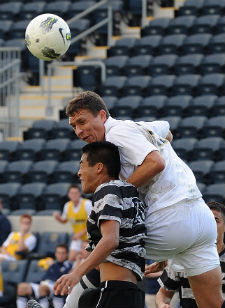 “I love playing with Derek, we’re pretty much the same,” Greenspan said. “We’re both big guys, vocal, try to physically dominate a match as well as technically, which you don’t really see from a lot of big guys – it’s either one or the other. I think it’s tough on forwards because they’ll think we’re big guys and we’re not as good with the ball at their feet, whereas me and Derek we can switch off, one of us can play on the left, one of us can play on the right, or vice versa.”

Greenspan is also the program’s all-time leading goal scorer with 17, and is an obvious target on set pieces, scoring seven goals in 2013. Leading scorer Jamie Dubyoski (with 10) was only a sophomore, Sam Bascom logged significant minutes and Thomas Shiiba is poised for a bigger role. Rising sophomores Alex Evans, Daniel Camuti and Matthew Saunders will get opportunities to help replace the graduating center mids.

Because of the unique nature of playing college soccer at Navy, it gives the team even more to bond about as well. The team chemistry is another reason for confidence, and a significant reason why many of the current players decided to pick the program – along with the culture instilled by coach Brandt.

Said Vogel: “On the field, if we’re talking specifically soccer, we’re just as close as any other college team. But we’re ten times closer because of everything we go through off the field together.”

It’s clear that under Brandt, Navy soccer will continue to aim to be the best possible, both on and off the field.

“I want people to look to us, I want us to be a model in Division I soccer,” he said. “We can’t be a model for all things, I’m not talking about winning championships, I’m talking about how to do Division I athletics. How to run a Division I men’s soccer program, possibly, how we look tactically, are people looking over their shoulder at us. Those things are in the sphere of being relevant.”