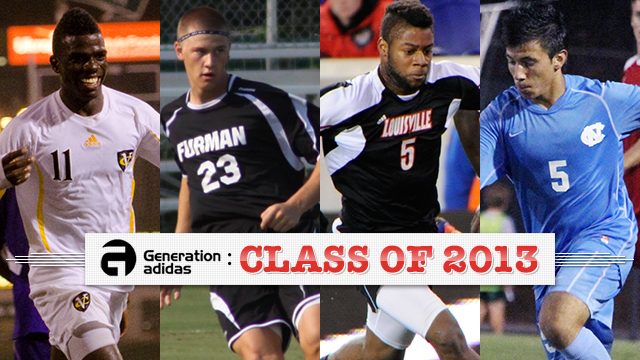 Each year, aspiring pros leave school early and leave for MLS. For those not attached to an MLS Academy, a Generation adidas contract provides a path from college to MLS that includes a couple years guaranteed, along with extra money for education for players who want to continue to pursue that option down the road. 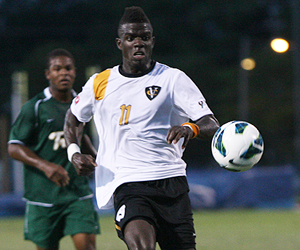 This year’s crop is only seven strong, but there are promising players heading to the pro ranks. Here’s a look at what the 2013 Generation adidas class has to offer:

Rundown: A hulking center back who can score goals from set pieces, Zimmerman has plenty of experience with the U20 and U18 MNTs, a pedigree that he brings with him to MLS. The defender has the physical tools to fit in right away, although it’s hard to know how much time he might get in his rookie year. He’ll miss the combine while recovering from a muscle injury.

Rundown: In two seasons at North Carolina, Lopez has progressed nicely and celebrated a national title. The defensive midfielder isn’t the biggest player, but he covers a tremendous mount of ground, passes the ball well and can get forward to link up and contribute to the attack decently enough. He fits a bit more into the project category, and will need to come along slowly, but he has plenty of potential and could be an exciting midfield prospect.

Rundown: Even though he’s coming from a program that has only recently arrived on the national scene, Johnson is a promising and physically talented striker who blossomed the last two seasons at the Richmond school. Forwards usually need to be built in the right way to adapt quickly to MLS, and that’s what Johnson has – he only needs to make sure he becomes a consistent force in order to find success.

Rundown: Probably the most MLS-ready prospect in this Generation adidas class, Farrell is a versatile and athletic defender who can play right back, center back or defensive midfield. He enjoyed a very strong career at Louisville, and would be able to compete for playing time right away at the professional level. His potential might not be as high as some of his other GA peers, but he’ll provide help right away for one of the teams picking in the top five.

Rundown: Like 2012, one of the members of the Generation adidas class enters with his future position unknown. Zavaleta, a standout forward for national champions Indiana, excelled as a central defender during a strong youth club career. So what’s his best position? Good arguments can be made for both when considering his size, ability on the ball and soccer brain. Whoever ends up selecting him in the draft needs to pick one and simply stick with it to get the most out of him.

Rundown: The forward transferred from NAIA program Mobile to UCF for the fall of 2012 after scoring 53 goals in two years at the lower level powerhouse. While UCF didn’t enjoy the greatest season, it gave Brown the platform to showcase his talents and show what he can do on the field. A strong, powerful striker who also has blazing speed, Brown might not be able to step in and start right away, but he’ll be a good weapon off the bench if he adjusts quickly.

Rundown: The youngest player in the class, Manneh is also the biggest wild card. He’s a goal scorer extraordinaire at the Development Academy level, scoring 35 goals in 23 games during one season with Texas Rush before moving to play a season at Lonestar. He spent last year playing for the Austin Aztex in the PDL, where he also notched an impressive goal total. Whoever snaps him up will bring in a player who could have the highest ceiling of any of the GA products, but might not contribute significantly right away.