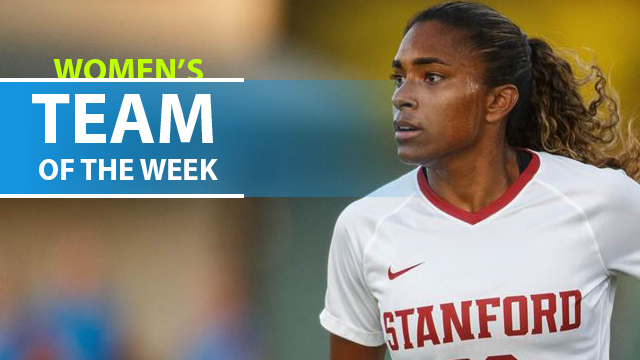 Big-time players step up in the biggest games.

That’s not always the case, but it was this past Saturday in Stanford’s Pac-12 opener.

Traveling to face USC on the road, junior superstar Catarina Macario helped to propel the 2017 national champions to a massive 3-2 win in Southern California.

Macario engineered the game’s first goal, as her set piece service found Madison Haley for the opening goal. After USC roared back and took a lead, Macario scored two more times, leading the Cardinal to a 3-2 victory.

Below are some of the other players over the past week of Division I women’s soccer.

GK Alisa Crooks, Alabama – Appearing in just her third college game of her freshman campaign, Crooks made three saves in a 2-1 overtime win against Tennessee.

D Adalee Broadbent, Maryland – A defender from Pennsylvania, Broadbent helped the Terps to a famous 2-1 win on the road against Rutgers. She assisted on the game-winning goal, playing the full 90 minutes.

D Kailee Gifford, California – It was a memorable Pac-12 opener for the Golden Bears, beating UCLA for the first time since 2015. Gifford accounted for the winning goal, getting forward to finish with just a few minutes left in regulation.

D Carlotte Wubben-Moy, North Carolina – The junior from England played every minute at the back for UNC last week, scoring a goal in a 3-0 win on Sunday against Notre Dame. She also helped keep a dangerous NC State attack in check last Thursday.

M Taylor Kornieck, Colorado – A stellar season for the senior midfielder continued for Kornieck. She led the Buffaloes to a 2-1 win in overtime against Arizona, scoring both goals. The winning tally came from the penalty spot.

M Emina Ekic, Louisville – Ekic setup both game-winning goals for Louisville last week in a pair of road wins against Syracuse and Boston College. She tacked on a pair of goals for good measure as well.

M Jyllissa Harris, South Carolina – Leading the charge in two wins for the Gamecocks, Harris grabbed her first two goals of the season last week. She scored against Alabama, and then provided the winner in a 1-0 win against ranked foes Arkansas.

M Mya Jones, Memphis – The freshman’s strong 2019 continued last week, as Memphis went on the road to beat both UCF and South Florida. Jones played the full 90 in a 1-0 win against the Knights, before setting up both goals in a 2-1 win against South Florida.

M Courtney Reimer, Saint Louis – Helping to anchor two big Atlantic 10 wins for SLU, Reimer scored goals in wins against Dayton and VCU, including the winning tally against the latter.

F Catarina Macario, Stanford – The numbers are quickly piling up for Macario once again, as she’s scored 12 goals and added seven assists on the year. Saturday’s game was the fifth time in nine games she’s scored two or more goals in 2019.

F Deyna Castellanos, Florida State – Castellanos continues to produce from a deeper role for the Seminoles. She scored twice and added an assist in wins against Clemson and Syracuse.