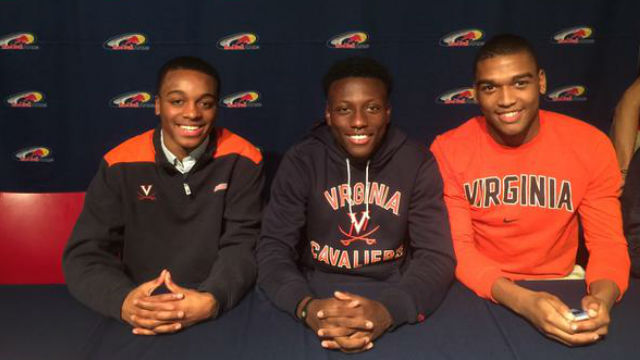 While the suspense may not be the same as in other college sports, National Signing Day is still an exciting time for elite soccer talent.

The players on the cusp of collegiate soccer have sacrificed greatly to get to this point, preparing to continue their playing career at the next level.

TopDrawerSoccer.com is your one-stop destination for today's excitement. Check back to this page throughout the day as announcements roll in, as we'll be updating this story on a regular basis. Make sure to check out all the links here as well, to peruse through the coverage leading up to Wednesday.

Learn how you can also get involved as well.

Good morning and welcome to this year's National Signing Day coverage. We'll have lots of exciting content coming your way throughout today so before th check back often. Before the announcements start rolling in, catch up with all of our linked coverage above. A quick reminder as well that there will be little surprise from the top ranked players in the class of 2015. Top ranked men's player Mukwelle Akale has signed for Villarreal in Spain and elected to skip college, while No. 1 recruit on the girls side, Katie Cousins, already enrolled at Tennessee for the spring semester. (7:05 a.m.)

Auburn Soccer is ahead of the curve this morning, one of the first Division I programs to receive its National Letters of Intent. Florida midfielder Karli Gutsche was one of the first to be announced by a school. Her older sister Karina just wrapped up a standout SEC career at Florida. (8:34 a.m.)

Our first NLI of the day is in! Welcome Karli Gutsche to the Auburn family!! Gutsche is a mid from Lithia, Fla. pic.twitter.com/ciVgiqpPfI

The reigning men's national champions Virginia has its first commitment, as New York Red Bulls Academy midfielder Derrick Etienne has signed his NLI to join the ACC program this fall. Etienne, the No. 43 ranked recruit from the IMG Academy Top 150, is one of a trio of Red Bull Academy players who are signing to join the Cavaliers, as Wesley Wade and Malcolm Dixon will continue playing alongside Etienne. (9:15 a.m.)

Match Fit Academy FC in New Jersey has sent its share of quality players to the Division I ranks of late. Two from this year's U18 ECNL side include Carly Leipzig (Boston College) and Hana Kerner (Virginia) will be ACC foes in 2015. (10:17 a.m.)

We are so excited, proud and honored to welcome the PSWS Class of '15!! #WeAre pic.twitter.com/Fj15z6TIJp

While some may question if it's the purpose of MLS Academies to supply Division I schools, D.C. United was the first team to release its list of seniors heading to college, with 16 players heading to school. Three of them are heading to nearby Maryland (Jorge Calix, Eryk Williamson, Daniel Reeves), one to Akron (Alonzo Clarke) and Virginia Jean-Christophe Koffi. (11:14 a.m.)

Solar Chelsea SC standout Caleb Smith signed with SMU today. Smith was previously committed to Duke, but he told TopDrawerSoccer on Tuesday that he decommitted and picked the local school. Smith is #12 in the IMG Academy Top 150 Players from the class of 2015. He is the fourth ranked player among those who have not signed a professional contract. The defender is the only college-bound player with experience with the U.S. U20 Men’s National Team. He is an outside back who should help SMU immediately and for the next few years. His commitment adds a blue chip prospect to a deep 2015 recruiting class for the Mustangs. (11:44 a.m.)

Ten newcomers are heading to Saint Louis men's program this fall. One of the big additions is a transfer from Evansville, forward Faik Hajderovic. Defender Eric Davies is also an intriguing add from FC Dallas, who was also at the 2013 U17 World Cup with Canada. (11:55 a.m.)

Notre Dame women's soccer received an NLI from Natalie Jacobs. The Slammers FC standout is the No. 6 ranked player from the IMG Academy Top 150, and has the potential to immediately add something to the Irish attack in 2015. (12:22 p.m.)

The next NLI comes all the way from California! Excited to welcome Natalie Jacobs to the Irish Family!! pic.twitter.com/4rh4dvU4OC

Speaking of top 10 recruits, UCLA men's soccer has announced the addition of LA Galaxy Academy defender Malcolm Jones, who is ranked at No. 8 in the IMG Academy Top 150. Jones is an athletic, versatile defender with youth national team experience. (12:32 p.m.)

Malcolm Jones from Chino Hills, CA is now officially the first member of the 2015 class! Welcome to #UCLA! #GoBruins pic.twitter.com/2oA1gb4lif

Commitment changes are rare in soccer, but one of note has occurred, as Dallas Sting striker Mimi Asom is heading to Princeton instead of Stanford. She is currently the Sting's leading scorer with 17 goals and five assists and No. 67 recruit in the class of 2015. Asom was also her high school team's captain at Hockaday in Texas and is the top scorer in Soutwest Preparatory Conference. (12:59 p.m.)

While an ACL injury may have impacted her current club season, Match Fit Academy FC's Kayla Jennings should be a hit in the Big Ten for Maryland women's program. The No. 27 ranked recruit signed her NLI and is the first posted on the team's Twitter account. (1:24 p.m.)

Georgetown picks up a commitment from Peter Schropp, a left back from the Chicago Fire Academy. Schropp was a member of the U.S. U17 Men's National Team in 2013. He is No. 21 in the IMG Academy Top 150 for the class of 2015 recruits.

Nothing like signing your NLI in your dinning room with boxers on because of this snow day, but I'm officially a Georgetown boy!

Oregon State makes a big announcement with Houston Dynamo star Christian Lucatero signing with the Pac-12 program. Lucatero is an attacking midfielder with excellent vision and great skill. The Beavers coaching staff has done well in recent years with providing a platform for gifted attacking players to flourish in college soccer. Lucatero is No. 17 in the IMG Academy Top 150 and the top rated recruit headed to Oregon State.

In the January recruiting ranks update, Duke checked in the with No. 6 class in the country. They've recently announced the addition of Kayla McCoy, the No. 3 ranked player in the IMG Academy Top 150 and first Letter of Intent received by the Blue Devils. (2:38 p.m.)

Few players are two-sports athletes at the college level these days. But Eclipse Select scoring ace Maya Neal is one of them. The No. 30 ranked recruit in the country, Neal (pictured below) signed with Tennessee's top recruiting crop and will also run track for the Volunteers. As you'd expect, she's a speedy forward who has enjoyed plenty of success at the ECNL level. (3:47 p.m.)

Here's one for the Philadelphia Union fans. Morgan Hackworth, son of former Union manager John who is now the head coach of the U.S. U16 BNT, submitted his LOI to Syracuse, according to head coach Ian McIntyre's Twitter account. (3:54 p.m.)

As usual, Maryland men's soccer program is expected to add a large haul of players. Including the trio of aforementioned D.C. United players, Baltimore Celtic midfielder Connor Smith, the No. 33 ranked recruit, inked his Letter of Intent to play at College Park this fall. (4:52 p.m.)

One program that should be excited about its recruiting class is Washington. While the Pac-12 looks to be as murderous as ever in 2015, head coach Lesle Gallimore has nabbed a top crop of talent that they announced today, including No. 13 ranked recruit Kelcie Hedge from Idaho. (5:12 p.m.)

While college announcements are far from over (they'll last well into the summer) one of the biggest classes revealed today goes to Texas Tech. The Red Raiders, which made it to the Sweet 16 last fall, added 13 players on Wednesday. (5:24 p.m.)

Stanford women, which carried the No. 1 recruiting class ranking into Wednesday's Signing Day, announced their 2015 class of six players, with Asom's switch to Princeton the only noted difference. With three players in the top 10 all locked up, the Cardinal remain firm favorite to land the top spot for the second year in a row. (9:46 p.m.)