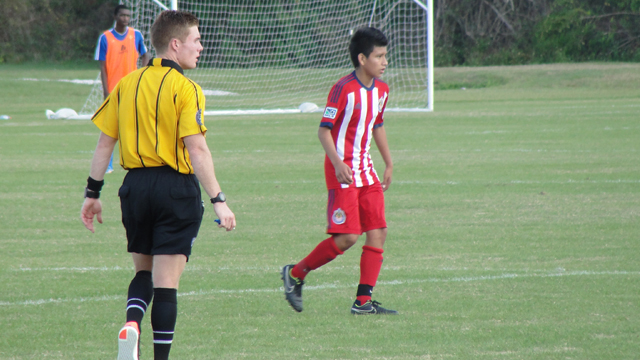 How would you react if you didn’t know if your job would be there in six months? Or if your company was consolidated but you had to keep plugging away at future prospects for the industry?

That difficult proposition faces Chivas USA’s academy staff. Academy Director Sacha Van Der Most and coaches Brian Kleiban and Andrew May have the smallest youth coaching staff among the MLS academies, but those excuses don’t sit well with them. They’re set on making the most of every chance they have even with an uncertain future looming.

With four players on the most recent U.S. U15 Boys National Team camp roster (tied for the most from one club) and players called up to various other youth national teams for the U.S. and Mexico, the Chivas USA academy is compiling a resume that stacks up with any club in the country.

Chivas USA academy coaches Brian Kleiban and Andrew May recently chatted with TopDrawerSoccer about the youth national team call-ups, developing players, and what’s next for them as coaches.

TopDrawerSoccer (TDS): At the most recent U.S. U15 BNT camp, Chivas USA (including John ‘Xuxuh’ Hilton) was tied for the most representatives from a club. What does it mean to you as coaches and as a staff that your players are being recognized for those types of accolades?

Brian Kleiban (BK): “We are very proud that the boys are being recognized for their hard work during this long process. With our group, it’s been a five-year process where we’ve started from scratch developing these players with the basic fundamentals needed to be successful at the top level.”

TDS: The U14 Chivas USA team is one of the most famous teams in U.S. Youth Soccer history. The players are now seeing individual recognition with call-ins to YNT camps. Brian – you’ve been with this group for a long time. How do you keep them motivated as a whole? How do you continue to push the players to reach higher levels when you’re already near the pinnacle in domestic accomplishments?

BK: “Well, from day one we’ve created a competitive culture in training where focus and work rate are non-negotiable. The level of focus and intensity demanded of the group in every rep of each exercise of every session sets the tone. It has reached a point where the players demand excellence of each other. Every player shows up to practice with the right approach and mentality. This enables the group to grow individually and collectively on a daily basis.”

TDS: The players that are getting called into the YNT aren’t necessarily players who used to feature with the national team – smaller, technical types – even those these seem to be the players that emerge more regularly at the professional rank. Do you believe these players would have been found if they were not playing for Chivas USA?

BK: “I agree JR. Slowly, it seems that we are eliminating that stigma domestically with regards to player selection in youth national teams. Historically, the players we are developing where the technical and tactical components are prioritized over size and athleticism have been overlooked. It’s critical that from top to bottom we get it right and things seem to be moving in the right direction.  The question begs had the Xavi’s, Iniesta’s, Isco’s, David Silva’s, Messi’s, James Rodriguez’s, Cesc, Gotze’s, Ozil’s, Cazorla’s, Aguero’s, Di Maria’s of the world been born stateside, would they have made it through our system? I don’t think so. And that’s a depressing thought. How many kids with that potential have we ignored in the past? Moving forward, we have to get it right.”

It is tough to say if these players would have been identified had we not been at Chivas USA or within the academy system. Obviously, the USDA academy system has facilitated this task by filtering the majority of the top talent pool into its clubs.  There is no doubt that the scouting network has improved domestically. Our boys already had US Soccer scouts at our games at u12. I’m sure 3four3 and the initial u11 video going viral, had a lot to do with the boys being identified super early in the process.

TDS: When you guys look for new players for the academy, what is the most important attribute for a successful player?

BK: “Technique and tactical sense. Those are the attributes that need to be prioritized. The size and strength attributes go out the window! We could care less.  I’ve heard plenty of domestic coaches argue that you can’t teach athleticism. Give us an athlete and we can teach him technique and how to play the game. Not if your aim is to develop top-level prospects for a possession-based game.”

Andrew May (AM): “In addition to the technique and tactical sense of players, we also look for the personality in each of the players. The best players are the ones that are intrinsically motivated to continue to improve their game and to reach their maximum potential as a soccer player. A player might have good technique but if he has a poor attitude and bad training habits, he will not realize his dream of playing at a top level.”

TDS: When new players come to the club, in what area of their game are they behind the most?

BK: “Tactically. Very few players have been taught how to play a specific position/role within a team. They don’t understand what their responsibilities are in possession, defensively, or in transition. Most go from complete pick up game soccer to a structured environment. Naturally, there is an adaptation period for some of the players.”

AM: “It is 100% their tactical awareness of the game. Most of the players that come in have always been the best or one of the best players on their respective teams. The players typically rely on their natural technical abilities while the coach ignores the tactical part of the game. They have not been asked or taught about how to play their specific position. When players come here they are asked to do things that will improve their soccer IQ and what will be required of them at the top level.”

TDS: I don’t think many people realize the adversities against the Chivas USA academy. There are only three teams and two coaches. Do these restrictions almost help in the sense that you guys know you aren’t getting new players and you have to focus on improving the small group that you have?

BK: “Yeah, it’s a unique situation. We just have to stay the course and focus on our job, which is player development.”

AM: “Our job is to help players develop their game. We can only control what is in front of us and continue to do our job.”

TDS: In Florida [at the Academy Showcase], you featured a lot of the U14 players with the U16 team, but that was a unique situation given the U14s were off then. In regular games, what is your philosophy on when to play players up an age and why?

BK: “Yeah, we took a core group from the 14s to Florida and gave them valuable minutes at the Showcase. It’s important that if a player is ready from a technical and tactical perspective and they are dominant within their own age group, they have opportunities to play up. The speed and physicality can pose a different challenge for them and aides in part of their development.

“The tricky part is having the right structure in place club wide for players to have success moving within the club from team to team, age group to age group. Meaning, it’s critical to have the proper infrastructure in place to create that platform for players to have success playing up. In my opinion, the keys are having a staff who share a clear vision and training methodology when it comes to the game.

“In the right setting, I completely support players playing up and believe it’s important for their development.”

AM: “Taking the U14 players to Florida was a testament to how hard these players have worked to improve their game and be ready for the next challenge. We have a staff that takes great pride in preparing the players on their soccer journey. We discuss each week about each player and how they are doing. If a player is having success at his own age then it is time to challenge him at a different level. We look at each week/game and decide on player’s form and what would be beneficial to the player and that age group team.”

TDS: You guys both came to Chivas USA with a lot of success at previous stops. With a professional club now, have you changed what you are looking for in a player? Are there more restrictions on how your teams play now that you are a coach in this environment?

BK: “Nothing changes in terms of what we look for in a player. Technique and tactical intelligence. Mental speed over physical speed.

“No restrictions whatsoever. At Chivas, Sacha [Van Der Most] has given me complete freedom to continue working within our methodology. Monopolizing the possession of the ball, playing attacking soccer, and pressing in unison to recover the ball as high up the field as possible continue to be the staple of our teams.

AM: “Agreed, nothing changes. Always working hard to find players that fit our mold and have a future at a top level.

“Here at Chivas USA we have a unique situation in that the staff works closely together at each training session and the games. Our teams have an identity that allows players to move within the three teams and still have an understanding of their respective roles. We work within the same methodology with the goal of preparing the players for the next level.”

TDS: The opportunities for coaches to step up from the academy to the first team have been non-existent so far. Do you guys aspire to coach at the pro level? As ambitious young coaches, do you believe there are opportunities out there for you to take the next step from academy to pro?

BK: “There is always a first time for everything. It’s always good to set yourself short-term and long-term goals. That’s definitely one of them.

“I think that if you continue to put in the work and produce a top-level product on a consistent basis, there will always be opportunities for upward growth.  The immediate focus is to continue this process with a fantastic group of players that we’ve put nearly 5 years into.”

AM: “Yes, we are coaches with ambitions that want to be challenged at higher levels one day. It is important to prepare yourself for that day when you get that phone call. But for now, it is about continuing to work hard and improving yourself as a coach and get better at your trade.”