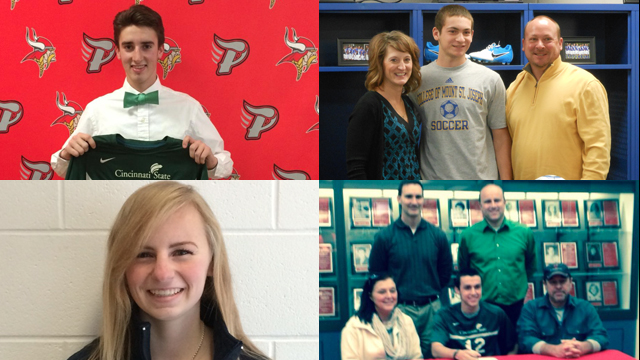 The top youth soccer players around the country will officially sign on the dotted line today, as members of the class of 2014 turn their verbal commitments into a signed National Letter of Intent.

Throughout the day, this page will be updated with all of the announcements seen in various channels of the Internet as National Signing Day. So check back a few times as the college soccer powerhouses across the nation official unveil their 2014 recruiting classes.

Don't forget to send us your photos from Wednesday to commit@topdrawersoccer.com to be posted in our gallery. And check back here multiple times throughout the day for updates as the commitments are announced.

Scoll to the bottom for the latest news.

With it well past 7 am on the East Coast, National Signing Day has officially begun. A couple of programs have begun to let recruit information trickle out via social media, including Tenessee women's program and NC State men. (8:28 am)

LSU has announced the addition of New Zealand U20 Women's National Team goalkeeper Lily Alfeld. That continues the international trend that Brian Lee has set with his program, as he added players like Summer Clarke, Emma Fletcher and Megan Lee last year. (9 am)

It's official! Welcome New Zealand's U-20 GK Lily Alfeld (Christchurch, New Zealand) to #LSU in the Class of 2014! pic.twitter.com/PDaAvAEoP2

Program announcements continue to kick off, as West Virginia men reveal their first announced signee, while the College of Charleston have three under their belts already. (9:30 am)

Furman men's soccer program has announced its first NLI, Brendan Richardson, an Australian native who will head to Greenville. Look for more significant international signings to take place today in both men's and women's soccer. Also revealing its first member is Auburn, making the addition of Orlando-based midfielder Maddie Coats official. (10 am)

Several players around the country have graduated last December and are preparing for spring practice instead of Signing Day. Maryland women's soccer confirms that two of their top recruits, Madison Turner and Julia Moore, are already doing well thus far. (10:15 am)

SEC soccer is certainly a conference to watch in the coming years. Fresh off an outstanding season, South Carolina is releasing its commitments, and head coach Shelley Smith is unveiling her class today. Staying in the conference, Auburn's release continued throughout the morning, while LSU unveiled its second international addition of the day, this one from north of the border. (10:42 am)

More programs are jumping into the action on Twitter. Indiana women, fresh off a quality Big Ten campaign, released shots of a few signees, while 2013 College Cup entrant New Mexico picked up a trio of local Albuquerque recruits. Head coach Jeremy Fishbein is likely eager to make another run at a Final Four spot. (11:06 am)

Several recruits from the boys and girls IMG Academy 150 are officially signing. No. 16 ranked Jorian Baucom has sent in her NLI to LSU. The SC Del Sol forward from Arizona is a U.S. youth pool player and will look to jump start the team's attack in 2014. In need of a replacement for senior leader Kevin Cope, Michigan State announced the signing of No. 90 ranked defender Jimmy Fiscus, from Crew Soccer Academy Wolves. The determined center back could slot in from the opening game this fall.

Texas A&M might just be the first program to release a completed class. With IMG Academy ranked standouts Mikaela Harvey (No. 4) and Haley Pounds (No. 15) already in the fold for the spring, the Aggies will be heavy favorites in the SEC once again. (11:24 am)

Next up for the Lobos is the No. 53 ranked recruit, a center back from Houston Dynamo's Academy.

Our next signee is Matthew Dorsey from the Houston Dynamo Development Academy from Spring, Texas. #GoLobos pic.twitter.com/Wfk98fOVgg

West Virginia women have gotten in on the act, announcing the signings of Toryn Broadwater and Michaela Abam. The latter is No. 18 in the IMG Academy 150, and was a member of the U.S. U17 WNT player pool. She's a huge addition to the back line alongside Kadeisha Buchanan. Over in the SWAC, Alabama State jumped on the international recruit bandwagon, bringing in a Swedish defender. (11:49 am)

One of the best attacking players in the ECNL, Anna Beffer's commitment to Oklahoma State is now official. (11:54 am)

Excited to announce Anna Beffer has joined the Cowgirl Soccer family! We look forward to seeing her in Stillwater! pic.twitter.com/jrYt6B7Ou2

More top recruits are signing on the dotted line. West Virginia men added Sporting KC standout Joey Piatcyzc, No. 80 in the IMG Academy 150, as their 2014 continues to flesh out in impressive fashion. Also signing an NLI from the IMG Academy 150 and an MLS Academy is FC Dallas midfielder Patrick Khouri, who is heading to New Mexico. The Lobos also announced the signing of an RSL-AZ product. (12:03 pm)

Announcements are now coming thick and fast after it passed 9 am on the west coast. Minnesota kicked off its announcements with the signings of Megan Koenig and Julianna Gernes revealed on Twitter, while Marquette did the same with Katie Ciesiulka and Carrie Madden. South Carolina United Battery standout Avery Ryan officially signed on with High Point. (12:22 pm)

South Florida jumped on the bandwagon of programs to drop a release for an entire recruiting class. Nine ladies are heading south to compete in the American Athletic Conference. Auburn wasn't too far behind with their roundup, nor was South Dakota State. New Mexico men also made things official. (12:34 pm)

One of the more highly-anticipated classes in the women's side of things is Penn State. Erica Walsh secured commitments from a variety of talented players across the country, including No. 77 ranked forward Elizabeth Ball from Richmond, Va. Follow along as the class is revealed throughout the afternoon. (1:02 pm)

We are excited to announce our first addition to the 2014 roster - Richmond, Va. native Elizabeth Ball! pic.twitter.com/DS8rY1DZAa

More classes are now becoming official. LSU wrapped up another Top 10 recruiting class with a six-player group of standouts from around the world. Baylor checks in with a mix of in and out of state talent and Evansville men have their 2014 crop. (1:05 pm)

UCLA, likely to bolster the top men's recruiting class yet again, already announced the addition of transfer Larry Ndjock. The Bruins bring on a boatload of talented players once again, starting off with Chase Gasper. (1:20 pm)

Big-time commitments continue to roll in for Penn State, as the addition of No. 8 recruit Madeline Elliston is now official. Another top recruit in Kirsten Timmer is confirmed as well, with the defensive stalwart heading to Marquette. VCU women's head coach has started announcing her incoming crop of recruits. (1:34 pm)

Clubs get in on the Signing Day action as well. The Vancouver Whitecaps released their list of girls commitments, sending a total of 12 players to programs in Canada and the United States. That includes Chelsea Harkins (Washington State) and Nikky Turney (Nebraska). Seven players from D.C. United's Academy also revealed their choices, with desinations including Virginia, George Mason and Penn State, among others. (2:14 pm)

The nine-player class from Penn State is now done and dusted, as the Big Ten power looks to return back to the summit of the conference and College Cup. High Point unveiled a mammoth 15-player group while Missouri is joining the other SEC programs in making announcements today. (2:34 pm)

Two prominent programs recently fired up their Twitter accounts and are dropping updates, as Illinois and Duke get things started. Expect to see the Blue Devils feature prominently near the top of the 2014 recruiting rankings. (2:54 pm)

A program with some intriguing transfers headed their way, Colorado also welcomes several quality recruits today, including this defender from SoCal. (3:30 pm).

Jocelyn Orejel from So Cal Blues and Tustin, CA is our newest signee! Joss is a back with Mexican WNT experience. #GoBuffsNSD #CUin14

You're not going to hear from every prominent program today, as coaches continue to hit the recruiting trail. Maryland men's soccer has some serious holes to fill up top, though the addition of Baltimore Celtic SC standout and NSCAA High School Player of the Year George Campbell is a solid start. (4:00 pm)

While the program has yet to announce a replacement for the departed Randy Waldrum, Notre Dame is pressing on with their signings, having recently started announcing their recruits this afternoon. Expectations are high for yet another talented group of players to sign, so stay tuned as the announcements are revealed. (4:23 pm)

It's been relatively quiet from the women's Pac-12 powers like UCLA and Stanford. But that doesn't mean that their recruits aren't busy. Future Bruin and No. 13 recruit MacKenzie Cerda already signed on the dotted line today, and the top recruit from the class of 2014, Andi Sullivan, just made it official on the east coast. There will be a lot more to come from these programs before the signing season is over. (4:36 pm)

Last year's Big Ten regular season and tournament champions Nebraska added 12 players for the upcoming season, in an aim to keep the program rolling in what should be an even more difficult league. Texas Tech announced the addition of seven players for 2014, while new head coach Scott Donnelly revealed his first recruiting class as SIUE head coach. (5:02 pm)

There hasn't been significant movement from NC State yet. The ACC program missed out on the tournament last fall, but has lined up a strong group of recruits that will descend on Raleigh this fall. One of their top commitments, Conor Donovan already signed, and New Jeresey standout Mattias Fracchia recently made it official as well. (5:30 pm)

And the West Coast keeps the partying rocking into the night. UC Santa Barbara annouced a signing class of ten players including two internationals. The Gauchos will be adding more players to the class in the coming months. Washington tweeted out an initial class of six players. Cal Poly dropped an eight-player class in the evening, which included a trio of De Anza Force standouts. California announced a seven-player class including a defender from Italy. (10:31 pm)

Time to put a nice bow on the day, shall we? A lot has happened in a short amount of time, and plenty of classe remain unannounced. However, our recruiting coverage is relentless, and will not stop, so don't go anywhere. Several more programs released classes today: Notre Dame checked in with a ten-player class, Akron women announced its incoming group, Alabama inked eight, as did Georgia State women, Wyoming signed nine from three difference countries, to name just a few. Make sure to check back throughout the rest of the week and beyond, to track these players as they take the next step in their journey. (11:15 pm)