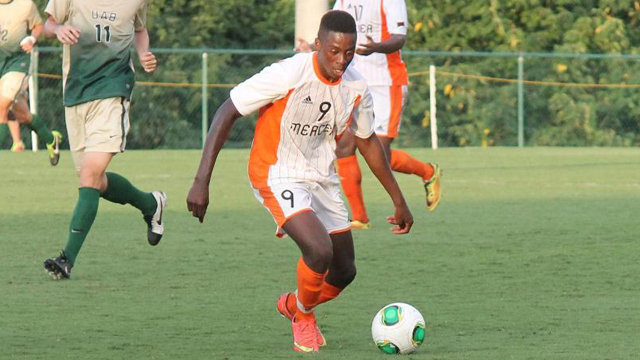 There were plenty of high profile games in Division I men’s soccer over the past week and just as many noteworthy performances. It was a freshman forward who stood out from the crowd though with an 11-point week that helped his team secure a pair of wins.

TDS Player of the Week: Will Bagrou, Mercer

GK Austin Pack, Charlotte: Recorded six saves, a career-high tying total, in Charlotte’s 1-0 win over UAB, which is one of the top scoring teams in the country with a 1.86 goals per game average. The shutout was the seventh of the season for the 49ers after Pack also spearheaded the effort earlier in the week with a 0-0 draw against Marshall.

D Grant Lillard, Indiana: The freshman defender scored a goal and recorded an assist in Indiana’s 3-1 win over Michigan on Sunday. He was also a vital part of the Hoosiers defense that shutout Notre Dame.

D Wyatt Omsberg, Dartmouth: Omsberg headed home the game-winner in overtime for the Big Green in an important Ivy League clash. Omsberg and the defense also shut out Columbia to secure all three points from the game.

D Liam Doyle, Ohio State: The Cincinnati State transfer enjoyed his best week with the Buckeyes, as the defender scored a goal in both games. Doyle is up to five goals this season. His defensive contributions have been equally as important as Ohio State only let in one goal during those two victories.

M Napo Matsoso, Kentucky: Matsoso recorded a hat-trick against South Carolina in a wild 4-3 game. The sophomore midfielder scored the first three goals of the game before the Gamecocks came storming back. Kentucky nabbed the game-winner in overtime to extend its winning streak to five games.

M Verneri Valimaa, North Carolina: Valimaa came off the bench and scored twice for the Tar Heels in a 2-0 win over Boston College on Friday in the lone game from the past week for UNC.

F Jamie Dubyoski, Navy: Dubyoski scored both goals against UMBC in a 2-0 win on Tuesday. He then had a goal and an assist in a 2-1 win over Holy Cross. Dubyoski has scored nine goals this season.

F Will Bagrou, Mercer: Mercer, as a team, scored six goals last week in wins over Wofford and VMI. Bagrou accounted for five of them and had the assist on the other goal. The freshman forward had a pretty good week.

F Andy Bevin, West Virginia: The Kiwi scored twice in a come-from-behind victory against Penn State last week. Bevin was responsible for both goals in the 2-1 win. He also provided the assist on the game-winning goal against Bowling Green on Saturday.

F Cyle Larin, Connecticut: The Huskies needed a big week from star forward Cyle Larin and the Canadian delivered. Larin scored twice in a 3-1 win over Temple. He then netted the game-winner in a 2-1 victory over SMU.