Coming through in the clutch is critical for every program, especially at this point of the season.

For DePaul, freshman forward Alexa Ben stepped up and helped the team extend its season-long unbeaten run to 15 games overall and nab sole possession of first place in the Big East standings.

In a tricky Thursday encounter against Butler, Ben scored DePaul’s first goal of the game, and then set up teammate Abby Reed for a late equalizer in the 87th minute. Ben rose to the occasion again on Sunday against Marquette, setting up the team’s first goal, drawing a penalty on the team’s second, and scoring the third herself to provide the full points on the road in a 3-2 victory.

Her exploits earn her this week’s TDS Player of the Week.

GK Emily Rusk, Alabama –The Crimson Tide’s tournament chances received a boost thanks to a win and a draw against Missouri and Arkansas respectively, two SEC foes with a much stronger RPI. Rusk made 15 saves in the two shutouts, as Alabama drew 0-0 and picked up a 1-0 victory over the weekend. 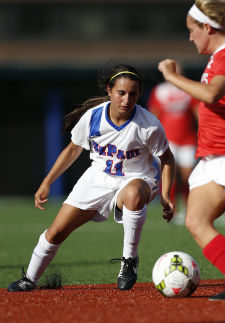 D Kadeisha Buchanan, West Virginia – Behind Buchanan and the rest of the Mountaineer defense, West Virginia seized control of the Big 12 regular season with a pair of road shutouts against Iowa State and Kansas.

D Jacqueline Altschuld, San Diego – Altschuld scored a goal and notched an assist as San Diego secured an upset against WCC rivals and top-ten foes Pepperdine. Altschuld played the full 90 as SD managed to hold the Wave attack at bay to pick up the 2-1 victory.

D Carly Black, West Virginia – Black also played 90 minutes at the back for West Virginia in both weekend wins, specifically helping shut down Liana Salazar and the dangerous Jayhawk attack on Sunday.

M Sarah Killion, UCLA – Killion’s tremendous senior season continued, as she scored three and had one assist in wins against California (3-0) and Arizona (6-0) over the past week.

M Rose Lavelle, Wisconsin – It was a banner day for the Badger attack, which put four past Minnesota in a 4-1 win against the Golden Gophers. Lavelle, who continues to impress in the heart of the Wisconsin midfield, notched a goal and a pair of helpers in the victory.

M Sarah Zadrazil, East Tennessee State – The ETSU attack continues to make mincemeat of its opposition thanks to Zadrazil, Hannah Short and Simona Koren. Austria native Zadrazil lands on the team of the week after scoring twice and adding three assists across a pair of Southern Conference victories against VMI and UNC Greensboro.

F Kate Schwindel, West Virginia – While battling through an injury-hit season, Schwindel was healthy and heavily involved in West Virginia’s significant Big 12 away wins over the weekend. She scored in WVU’s 3-0 win against Iowa State on Friday night, and followed that up with a two-goal effort in the team’s 2-0 defeat of Kansas to take control of the Big 12 regular season title race.

F Jamie Alexander, Furman – It was a record-breaking week for the junior as she scored four goals in under six minutes, establishing a new NCAA record for the most consecutive goals in a game. Alexander’s Furman side cruised to a 9-0 win over Chattanooga in that outing, while Alexander also provided the assist on a game-winning goal in a 1-0 defeat of Samford.

F Kelsey Haycook, La Salle – The senior standout continues to make her mark for the Explorers, as she scored a pair of game-winning goals, first on Friday in a 1-0 win against Dayton, and then in a 2-1 defeat of Saint Louis on Sunday.