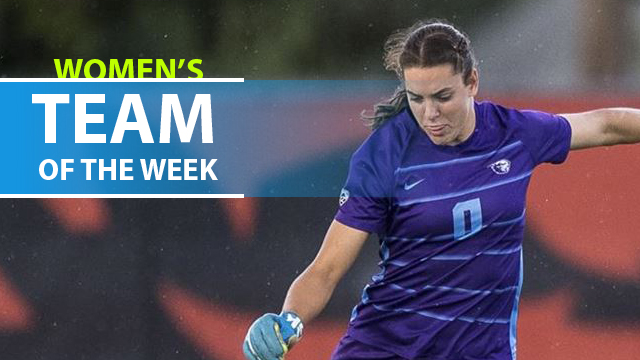 Hitting the road in search of big wins away from home, the Beavers traveled to Utah and Colorado. The two wins yielded a draw and a win, thanks in large part to the Player of the Week.

Goalkeeper Bridgette Skiba was at the forefront in both games, making two saves in a 1-1 tie against Utah, and then came up huge late in the game to secure a 2-1 victory against Colorado.

The win against the Buffaloes was OSU’s first in Boulder since 2012 and writes another chapter in the 9-1-1 record under new head coach Matt Kagan.

Team of the Week: September 30-October 6

GK Bridgette Skiba, Oregon State – While shutouts have been hard to come by for Skiba, the goalkeeper made several saves at the start of the game against Colorado. On the day, Oregon State was outshot 23-7 but thanks to Skiba came away with the three points.

D Carlotte Wubben-Moy, North Carolina – It’s a second straight appearance for Wubben-Moy, who assisted on the game-winning goal against Clemson and was just one of two players to log the full 90 minutes in Saturday’s victory.

D Camryn Biegalski, Wisconsin – The Badgers picked up a pair of shutout wins in conference play. Biegalski played 90 minutes in both matches, chipping in an assist in the 2-0 defeat of Michigan.

D Grace Bahr, Xavier – Bahr’s left-footed service paid off in a big way for Xavier, as it provided a quick outlet for her side to get forward. She ended up with four assists in wins against Creighton and Seton Hall, leading a stout defensive effort in both matches.

D Sydney Cummings, Brown – The junior’s stellar start to the season continued over the weekend, as she helped Brown win its second straight Ivy League game. Cummings played the full 90 minutes in a 2-0 defeat of Columbia.

M Reyna Reyes, Alabama – The freshman standout from Texas scored in a big 3-2 win against Mississippi State. It marked a second straight win for the Crimson Tide in SEC play.

M Avery Lockwood, Indiana – Another freshman that enjoyed a stellar week. She scored the winning goal in a 1-0 victory against Illinois and helped lock things down in a 1-0 win over Minnesota.

M Niki Clements, Belmont – The senior had a big week for the Bruins. Clements bagged the decisive tally in a 1-0 win over Tennessee Tech. She followed that up with a hat trick against Jacksonville State.

F Vanessa Kara, Florida – Kara’s transfer to Florida has paid off in a big way now that the SEC season is well underway. During Sunday’s 3-1 win against Texas A&M, she scored twice, including the winning tally.

F Julia Patrum, Charlotte – During a two-game road swing against Western Kentucky, Patrum scored twice, including the winner. She also had an assist against Marshall, as the 49ers won 2-1.