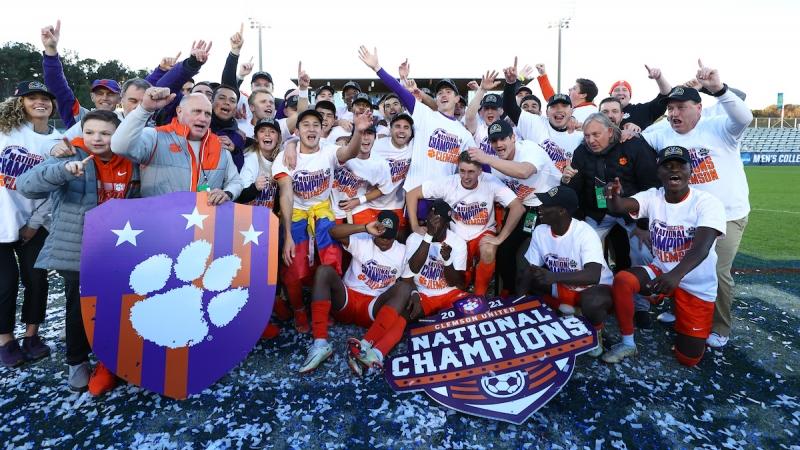 While the COVID-19 pandemic continues to linger, the soccer schedule in 2021 was slightly more normal in 2021. There were two separate Division I tournaments this year, with Florida State winning one shootout in a title game and losing the other.

Recap some of the biggest stories and moments from 2021 in club and college soccer.

ACC powers capture Division I crowns in the fall

It was an all-ACC sweep at the top of men’s and women’s Division I soccer as Florida State and Clemson finished at the top of their respective tournaments.

The men’s title game unfolded in vastly different fashion. A mistake by Washington goalkeeper Sam Fowler allowed Clemson to score in the first minute. Fifteen minutes later, the Tigers had doubled their lead and would hold on for a 2-0 win.

Of course, two other teams won national championships this year. With the pandemic shifting fall championships to the spring, Santa Clara won the 2020-21 title in women’s soccer, and Marshall claimed the crown against Indiana.

A 3-2 win by Virginia school Christopher Newport in the Division III women’s title lifted them to the crown over TCNJ. Connecticut College won the men’s Division III championship on penalty kicks over Amherst.

Keiser won the first championship in program history in the men’s NAIA tournament, while Tennessee Southern(w) triumphed in the women’s tournament on penalty kicks.

The past two years saw FIFA put World Cups on pause. In 2022 the women’s U17 and U20 World Cups are set to take place.

In-person camps resumed for the U.S., with the U20 WNT taking the field in October prior to the U17s also heading to California. With the Concacaf Women’s qualifying tournaments early next year, both of those camps were important.

The men’s youth World Cups will return in 2023. That meant both camps marked the start of longer preparation. A U17 MNT roster gathered in California at the start of November, while the U20s traveled to Mexico for the Revelations Cup. It was a rough trip, with games against Brazil, Colombia and Mexico. The U20s finished with a draw and two losses.

Rising from the ashes of the canceled Development Academy, MLS Next finished off its first season in 2021 with a summer tournament in Frisco.

With four age groups finishing with finals, three of the four teams that triumphed were MLS academies. Real Salt Lake bested the Philadelphia Union at the U15 age group, Weston FC won the U16s, Orlando City at U17, and Fire at U19.

The club season in the ECNL finished up in St. Louis for the Boys, as the U15 through U17 sides put a bow on the year. The winners at those age group were Carolina Elite Soccer Academy, Dallas Texans and Eclipse SC. At the oldest age group, Charlotte Independence U18/19 picked up silverware, while Utah Avalanche won the youngest.

On the girls side, a couple of age groups were able to finish in Florida before a hurricane forced a schedule change. When things picked up in Richmond, LAFC Slammers won the youngest age group (U13), while a dominant Solar SC side won the U14 age group, KC Athletics took U15 honors, while LAFC Slammers (U16) and MVLA (U14) rounded out the championship field. Before moving to Virginia, Eclipse SC won the U18/19 title.