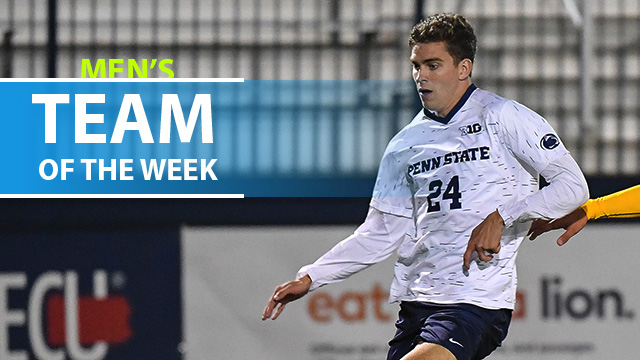 It’s been an impressive turnaround this season for Penn State.

In 18 months, head coach Jeff Cook has helped the Nittany Lions improve to a second-place finish in the Big Ten.

This past week, the program picked up a couple of massive wins in overtime, sealing their spot in the Big Ten standings. A big part of that came through the exploits of the latest men’s Player of the Week, Penn State forward Christian Sload.

Facing overtime in both matches, the Pennsylvania native capped off a memorable Nittany Lion comeback last Tuesday against Maryland. The visiting Terps jumped out to a 2-0 lead, but the hosts scored twice to force overtime. Sload grabbed the winning goal in the extra period.

The Nittany Lions took down the Terrapins for the first time since the 2005 season with Sload's game-winner with 30 seconds left in overtime!@NCAASoccer | @GoPSUsports #WeAre pic.twitter.com/5GMxlicCgw

He would repeat those heroics on Sunday against Rutgers. Three minutes into overtime with the score knotted at 1-1, Sload capped off the 2019 regular season with another game-winning tally.

Below are some of the other top performances from the past week of men’s Division I soccer.

Team of the Week: October 28-November 3

GK Will Smith, Lehigh – The 6-foot-4 senior goalkeeper stood tall over the past week, anchoring a pair of wins. He made seven stops in a 1-0 win against Rutgers, and then six in a 2-1 overtime victory over Holy Cross.

D Jack Maher, Indiana – Maher converted the lone goal of the game on Sunday as the Hoosiers topped Michigan State by a 1-0 score. The sophomore defender anchored a defensive effort that saw the team concede just once in two Big Ten matches, as IU secured the regular season Big Ten crown.

M Ian Rees, Campbell – Rees scored the game-winning goal over the weekend in a close 2-1 win against High Point, a crucial road victory. He also bagged a goal and setup another earlier in the week versus Longwood.

M Hal Uderitz, Seattle – Seattle made a two-game road swing to Texas, coming away with a pair of 1-0 wins against UTRGV and Incarnate Word. Uderitz anchored those wins from his midfield spot, grabbing the game-winning goal against UIW as well.

F Jack Hallahan, Michigan – It appears that Michigan is getting healthy at the right time of year. Hallahan triggered a big comeback for the Wolverines in College Park. Down 2-1 after the game’s first 15 minutes, Hallahan curled in a beautiful ball for the equalizer, and then tacked on two more goals in the win.

F Matthew Bentley, Missouri State – Playing his lone season at Missouri State after transferring in from West Virginia Wesleyan, Bentley is one of the hottest forwards in the nation. He scored three times last week, including twice in a come-from-behind 3-2 win over Valparaiso. Bentley opened the scoring against Loyola-Chicago as well, as Missouri State maintained its perfect record. A native of England, Bentley now has 11 goals this season.

F Christian Sload, Penn State – Sload picked a perfect time to snap a 10-game goalless drought against Maryland. He’s shown the ability to both score goals and create them, sitting on four tallies and five helpers this season. As postseason play begins, he will cut a critical figure to Penn State’s tournament ambitions.