On a star-studded roster like UCLA’s, identifying one standout performer can be an arduous task.

This past weekend however, Sam Mewis made it easy. The U.S. youth international midfielder was all over the stat sheet on a trip to the Pacific Northwest, piling up three goals and two assists in wins against Oregon State and Oregon, with all but one goal coming against the Ducks.

Her exploits earn her this week’s TopDrawerSoccer.com Player of the Week honors. 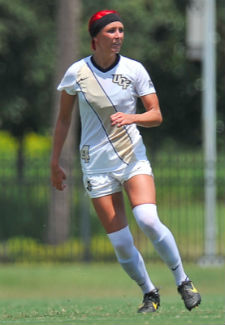 GK Genevieve Richard, Wisconsin – The senior from Quebec, Canada made a total of nine saves across to narrow 1-0 victories against Rutgers and Maryland. Her performance against Rutgers was especially noteworthy, making six saves in the win.

D Carleigh Williams, UCF – The Knights wrapped up the 2014 regular season campaign with a pair of 2-0 shutout wins against American Athletic opponents. Williams played the full 180 minutes, anchoring a defense that has conceded just one goal in its last six games.

D Katie Naughton, Notre Dame – In a pair of narrow, 1-0 ACC wins against Clemson and Louisville, Naughton anchored the defense, playing all 180 minutes in the shutout wins as the Irish secured its spot in the ACC women’s tournament field.

D Brooke Gilbert, Texas – The Longhorns snared a pair of crucial road victories against Oklahoma and Baylor, and Gilbert played all 180 possible minutes, assisting on the tying goal against the Bears in a 2-1 win.

D Kala Falkner, Auburn – With an RPI of 27, Auburn looks good for a NCAA tournament berth barring a collapse in its final regular season outing against LSU. And Faulkner’s play in a pair of shutout wins – 2-0 against Mississippi State and a 1-0 overtime defeat of Alabama – was significant as the junior anchored the team from central defense.

M Stephanie DeVita, Furman – It was quite the three-day stretch for DeVita, who helped Furman dominate a couple of Southern Conference opponents on the road. She amassed five goals and an assist in a pair of comfortable wins over UNC Greensboro and VMI.

M Kori Chapic, Penn State – Winding down her college career, Chapic put together a memorable weekend. In a 3-1 win against Nebraska, she had two assists, and she followed that up with a pair of goals in a come-from-behind victory against Iowa.

M Sam Mewis, UCLA – In what could be a Hermann-caliber season, Mewis continues to shine in the Bruins midfield. If she continues her red-hot form, there’s no doubt the Bruins will be heavy favorites in this fall’s national title chase.

F Kaitlyn Johnson, Washington State – On a successful road swing to Colorado and Utah respectively, Johnson helped the Cougars to a pair of wins. First, she bagged the winning goal against the Buffaloes, and also scored and assisted in a 4-2 defeat of the Utes.

F Tyler Lussi, Princeton – It may have come in a losing effort, but Lussi provided one of the performances of the weekend, scoring four times in a heartbreaking 5-4 defeat against Ivy League rivals Harvard.

F Ashley Hatch BYU – Few teams are hotter than BYU at the moment, winners of ten straight games, and Hatch has played a big role in the current run. Over the past week, she bagged three goals total in wins over Santa Clara and San Francisco. Hatch now has 15 goals in 17 games.