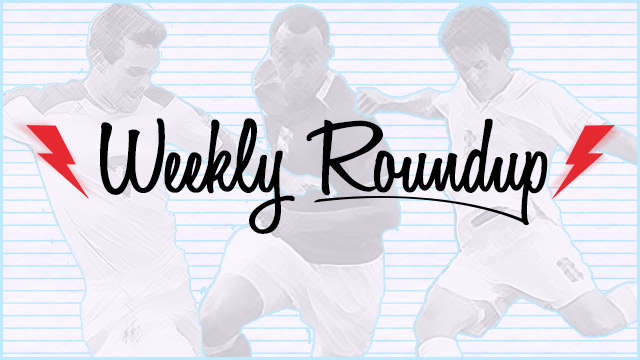 Welcome to the Weekly Roundup. Take a look back with us at the week that was across TopDrawerSoccer.com:

It was truly a tremendous experience for the U.S. U17 Women's National Team down in Guatemala, as the group wrapped up things up last weekend by winning the CONCACAF tournament thanks to a 1-0 defeat of Canada. While the goal-scoring exploits of Summer Green played a huge role in the success, the team's defense played perhaps a bigger role by not conceding a goal in all five games.

Both the U17 and U20 WNT are set to be involved in their respective youth World Cups this year. The U20 team is currently in camp out in California, where they drew 4-4 against the U23 WNT.

Also out in California for a training camp is the U14 Boys National Team, which had a high-scoring draw of their own, tying local academy side Chivas USA by a 3-3 score.

Staying with the theme of U.S. youth national teams, the U18 MNT is taking off for Portugal to compete in a tournament in May. The announced roster features six professionals as the identification process continues for the U.S. Technical staff.

Another set of player rankings came out this week, as we revealed the Top 150 class of 2016 Boys. The No. 1 player is a familiar face to those who know the current U.S. U17 Men's National Team. We also put out another TeamRank update, for Boys U13-U15.

Top European clubs continue to scour the United States for young talent. One Florida teenager recently went on trial with a certain North London club, and told us about the experience.

A number of the nation's best college players are plying their trade in PDL this summer. Find out who is playing where.

Recruiting season is still in full swing, and top girls and boys give us the lowdown as to what they are thinking in terms of college choices.

One recent player who is set to play at Stanford explained how a few trips overseas helped shape his decision making. And a club team in Maryland revealed who is committed where for college.

From the 91st Minute

Sky Sports releases a montage looking back on the past season in the English Premier League.

Alex Morgan is ready for the Olympics.