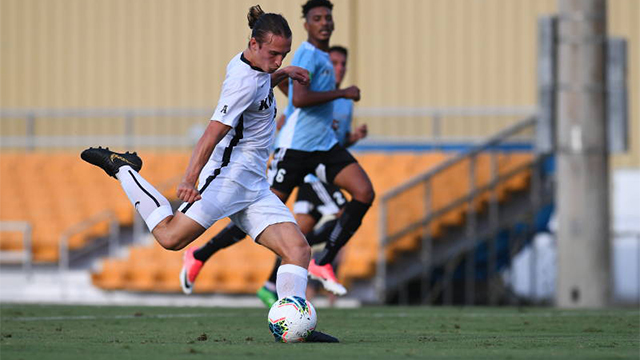 What to expect in 2019: Between its second-place finish last fall and a strong returning core, New Hampshire was voted as preseason favorites ahead of Stony Brook. The America East could see a number of teams rise into contention, as UMBC, Massachusetts-Lowell and Vermont return big players from 2018.

What happened in 2018: UCF and SMU finished tied atop the regular season conference standings. They were joined in the conference tournament by South Florida, Connecticut, Temple and Memphis. SMU clinched the automatic bid, defeating UCF on penalty kicks after a 1-1 draw in the final. Both teams advanced to the NCAA tournament, where SMU lost in the first round and UCF in the second.

What to expect in 2019: Both UCF and SMU bring enough back to suggest that they’ll be imminent threats in the conference play. South Florida, Memphis and Connecticut inject high quality recruiting classes, that if they hit like they could, can add a difference-maker or two on the field. Temple should be improved under the second-year of Brian Rowland’s tenure as well, which could make things really interesting in the regular season.

What happened in 2018: On the back of a strong finish to the season, VCU secured the regular season title with a record of 6-1-1. It was a close race with Davidson just three points behind, Rhode Island and George Mason four points back, and three teams – Saint Louis, Dayton and Fordham with 13. Rhode Island put it all together in the conference tournament, and nearly knocked out UConn in the first round, losing 4-3 in overtime in the first round of the NCAAs.

What to expect in 2019: In a 13-team league that plays an unbalanced schedule, the regular season race can be influenced by how the conference slate is drawn up. That being said, there should be a lot of similar programs competing for honors a the top. Fordham lost head coach Jim McElderry, who moved to Rutgers. Replacing him is Carlo Acquista; that program’s evolution is going to be worth following. While VCU, Rhode Island and Davidson seem likely to contend, Saint Louis is on the rise, bolstered by a strong recruiting class and high-level returning players.

What happened in 2018: Last fall’s dream season for Lipscomb saw the Bison finish in a tie for first place in the regular season, equal on points with Florida Gulf Coast(m) with 15. They went on to make it to the third round of the NCAA tournament after picking up the automatic bid, beating Washington on penalty kicks and edging UCF by a 1-0 score in the second round.

What to expect in 2019: If last year’s standings are anything to go by, another two-horse race might be in store for the upcoming campaign. That would pit FCGU and Lipscomb against one another again, as none of the other programs finished above .500 with their overall record. Enough talent left those to programs to suggest that North Florida or Jacksonville could throw a wrench in those plans, while Liberty enters a new era under head coach Kelly Findley.

What happened in 2018: On the back of an undefeated 7-0-1 record in conference play, High Point finished the season as comfortable winners during the regular season. Radford and Presbyterian tied in second place with 15 points, followed by Campbell and Gardner-Webb. High Point progressed to the NCAA tournament after falling in the Big South tournament via an at-large bid; Campbell knocked out High Point on penalty kicks in the conference tournament semifinals, beating Presbyterian to win the automatic bid.

What to expect in 2019: With each program facing the regular turnover of college athletics, a close race is expected, at least according to preseason polling. High Point holds the talent edge, despite losing big contributors from last year; Ilias Kosmidis enters his senior season after earning Offensive Player of the Year last fall. The reigning Freshman of the Year, Amadou Macky Diop, gives Radford plenty to lean on, while Campbell’s returnees should provide a formidable spine.

What happened in 2018: The resurgence of UC Irvine continued last fall under head coach Yossi Raz, who continues to build the Anteaters into an impressive program. He guided UCI to their first regular season title since 2013, as they led the conference in goals scored with 34. They held off UC Santa Barbara and UC Riverside to secure the top spot, as UC Davis checked in at fourth place. After UC Riverside upset the Anteaters in the conference tournament final, both sides earned a spot in the tournament. UCI beat Grand Canyon on penalty kicks, while the Roadrunners fell in the first round at Pacific.

What to expect in 2019: Even if UC Irvine’s recruiting class isn’t as good as advertised, several programs are going to be in the mix for first place. Edge probably goes to the Anteaters, but UC Santa Barbara brings back several key pieces, including Rodney Michael and Noah Billingsley.

What happened in 2018: A dream season for James Madison under head coach Paul Zazenski nearly took the Dukes into the final four. After beating out UNC Wilmington by a point, and holding a two-point margin over Hofstra. After a successful conference tournament run, the Dukes took down High Point, North Carolina and Virginia Tech, before falling short by a 2-1 score against Michigan State in the quarterfinals.

What to expect in 2019: Zazenski, who was the interim coach last fall, picked up the job full-time basis and leads the Dukes into the new season as favorites. There’s enough back from the quarterfinal squad to think that they’ll once again be in the mix for the bulk of the season. But they’ll get plenty of tests from UNC Wilmington, even if Emil Evelroth transferred to Louisville or Hofstra, which saw top attacker Luke Brown move to Maryland. The CAA usually runs close, so Delaware, William & Mary, Northeastern, Drexel and Elon will fancy getting hot at the right time.

What happened in 2018: Kentucky was arguably the story of the season last fall, taking the Conference USA by storm. The Wildcats worked their way to the regular season title, beating Old Dominion and Charlotte by three points. Florida International wasn’t too far off the pace, followed by Marshall and UAB. They made it all the way to the NCAA quarterfinals, coming up short at home by a 1-0 score.

What to expect in 2019: Few conferences face the same kind of turnover as the C-USA, after New Mexico had its men’s soccer program cut after the 2018 season. Jeff Kinney’s also taken over at UAB, which has plenty of holes to fill. While JJ Williams capitalized on his stellar season, signing a Generation adidas deal, Kentucky brings enough quality back to be considered the favorites. Likely to be right there with them is Charlotte, a program that consistently competes under head coach Kevin Langan. Florida International has big holes to fill with Santiago Patino getting drafted and Joris Ahlinvi transferring to Indiana, as does Old Dominion, which graduated significant senior talent.

What happened in 2018: A top of the table tussle saw Wright State and UIC battle it out for the regular season crown. The former held on for the win by a three-point total, followed by Oakland, Wisconsin-Green Bay and IUPUI. Both of the top two sides advanced to the conference tournament final, where UIC won the championship by a 3-1 score.

What to expect in 2019: The two best teams from last fall should be there or thereabouts once again, with UIC bringing back the likes of Jesus Perez to anchor the team’s offense. Wright State has some holes to fill, but do return the talent of Jackson Dietrich and Alec Phillipe. If you’re looking for a team that could make another big surge, Northern Kentucky’s international recruiting classes have looked promising and could lead to a big step forward in the fall.

What happened in 2018: A tough, down-to-the-wire battle for first place and the automatic bid in the Ivy League eventually saw Princeton claim the crown last year. The Tigers finished a lone point ahead of Columbia, and two ahead of Dartmouth. Rapidly improving Cornell checked in at fourth place.

What to expect in 2019: Another extremely close race is all but certain. Princeton may hold the edge as favorites, but Columbia’s received a boost with the highest-ranked class amongst the Ivies. Dartmouth looked to carry on with business as usual under new head coach Bo Oshoniyi who took over in 2018. Cornell should be poised to take another step forward this fall, while Yale showed signs of life. Penn re-tooled but also added a quality recruiting class. There isn’t going to be a ton separating these sides in the fall.