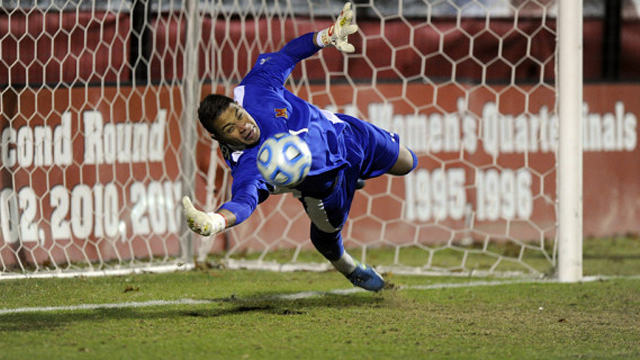 With the conclusion of the men’s Division I soccer regular season, there was a number of standout individual performance. This week, there were multiple players that were in the mix for the top billing as the goalkeeper of the week as noteworthy performances highlighted the resume for a few NCAA Tournament bound squads.

However, it was Big Ten Champions Maryland that had the best showing for its goalkeeper, which was enough to also claim the Player of the Week honors.

GK Zackary Steffen, Maryland: The U.S. U20 Men’s National Team goalkeeper was unreal this week for the Terps in the Big Ten Tournament. Steffen saved two penalty kicks in the shootout victory against Michigan State on Friday. He followed that up with another jaw-dropper against Indiana in the championship, which Maryland won 2-1.

D Clint Ritter, Furman: The senior defender was named the Most Outstanding Player at the Southern Conference Tournament after leading Furman to the title and three shutout victories.

D Uchenna Uzo, Coastal Carolina: The center back was named the Big South Tournament’s Most Valuable Player after leading the Chanticleers to the crown with victories over Longwood, High Point, and Radford.

D Brandon Adler, Providence: Adler was named the Big East Tournament Most Outstanding Defensive Player after leading the Friars to the conference crown. Adler and his fellow defenders allowed two goals in three games during victories over Villanova, Creighton and Xavier.

M Corey Baird, Stanford: The freshman midfielder had the game-winning assist for the Cardinal in double-overtime to help Stanford secure the Pac-12 championship with a 3-2 win over rival California. He was also involved in the first goal of the game.

M Abe Matamoros, Tulsa: Matamoros had a goal and an assist in Tulsa’s 2-0 win over SMU in the American Athletic semifinals. He scored the game-winning penalty kick in the shootout victory over South Florida in the championship game. He was named the Most Outstanding Offensive Player of the Conference Tournament.

M Jannik Loebe, Fordham: The freshman scored two game-winning goals in the Atlantic 10 Tournament to lead Fordham to the conference crown and the automatic berth to the NCAA Tournament.

F Khiry Shelton, Oregon State –The Beavers needed a win from their final Pac-12 game of 2014 and the senior forward delivered with a brilliant individual effort for the second goal of the game in a 2-0 victory over Washington.

F Alex Adelabu, Dartmouth: Adelabu scored two goals and added an assist in Dartmouth’s 3-0 win over Brown to capture a share of the Ivy League title and the conference’s automatic bid to the NCAA tournament.