Men's Team of the Week: November 12 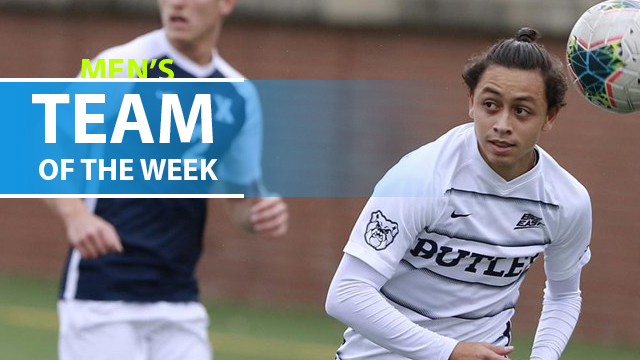 At this point in the season, it’s win or go home for some of the teams competing in conference tournaments.

With RPI a factor at this stage, every win is valuable, and a deep run in a conference tournament is crucial. Butler is still very much alive, and thanks to the latest Player of the Week, looks safe for an at-large bid.

Wilmer Cabrera Jr., who was named as the Big East freshman of the year on Monday, scored the game-winning goals for the Bulldogs in two wins last week. He tallied in a 2-1 win against Xavier at home to wrap up the regular season. On Saturday in the Big East quarterfinal, Cabrera converted from the penalty spot late in the second half, securing a spot in Wednesday’s semifinal at Georgetown.

DAWGS are back on top!

Check out some of the other top performances in men’s Division I college soccer over the past week.

GK Adrian Fernandez, Oregon State – The Spanish goalkeeper kept a pair of clean sheets against Stanford and Cal, as the Beavers picked up a draw and 1-0 win respectively.

D Ben Stroud, Missouri State – On the cusp of a perfect season, Stroud helped Missouri State to yet another win. His tally opened the scoring in a 3-1 win against Drake.

D Peder Kristiansen, Rhode Island – It was a wild Atlantic 10 quarterfinal between Rhode Island and Davidson, as the top seed won by a 7-3 score. Kristiansen scored a goal and was credited for two assists as his side eyes the conference auto bid.

M Esben Wolf, Providence – The Big East has a real shot at getting four teams into the NCAA tournament, with all four still alive in the conference tournament. Wolf inspired the Friars to a pair of wins. He tallied in a 2-0 victory over St. John’s, and then put Marquette to the sword, tallying the winner and setting up another in a 3-0 win.

M Phillip Mayaka, Clemson – The dynamic, box-to-box central midfielder enjoyed a stellar outing. He scored what turned out to be the winning goal, smashing home after a nice set-piece routine. He’s made a case to be freshman of the year.

M Jalen Campbell, Temple – Campbell picked the perfect time to score his first goal of the season. His overtime strike in the 103rd minute against Memphis provided the winning tally in the American Athletic Conference tournament quarterfinals.

M Matt Thorsheim, Bucknell – Only a Patriot League title is going to get Bucknell into the NCAA tournament. Thanks to Thorsheim’s two goals on the road against Navy, the Bisons remain in the mix heading into the conference tournament semifinals.

F Liam Butts, Penn State – Speaking of stellar freshman seasons, Butts continues to score goals as his first season of college ball winds down. He scored and setup another as Penn State eased past Wisconsin in the Big Ten quarterfinals on Sunday.

F Wilmer Cabrera Jr., Butler – After a slow start to his career at Butler, Cabrera’s been catching fire of late. He now has five goals in his last seven games, and has delivered in the clutch this season on multiple occasions. Six of his eight goals have been game winners.

F Rodney Michael, UC Santa Barbara – The Gauchos are now one game away from a Big West tournament title and the automatic bid that comes with it. Michael scored and assist over the weekend in a 2-0 semifinal victory against CSUN on Saturday.