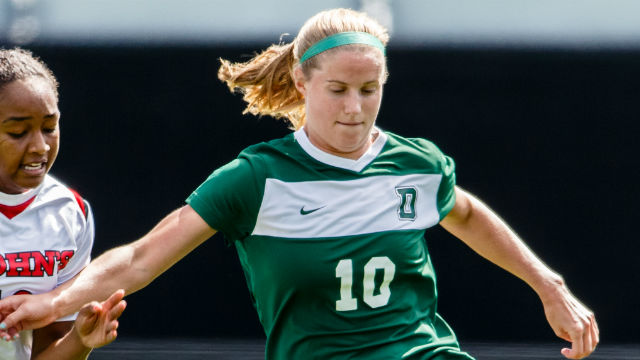 Time is running out on the regular season, with just one week remaining between now and the NCAA tournament.

Over the past week, a number of players delivered in the clutch to keep tournament hopes alive, none more so than Player of the Week, Dartmouth’s Corey Delaney.

Playing at home against defending champions Harvard, a loss or draw would see the Crimson crowned champions, while a win would keep the Big Green’s hopes alives. Delaney delivered, scoring twice in a 2-0 win.

GK Claire Wheatley, Illinois – The sophomore goalkeeper gave her side a chance to win, holding the dangerous Wisconsin attack at bay for 110 minutes. In all, Wheatley made ten saves in a 0-0 double overtime draw agaisnt the Badgers. 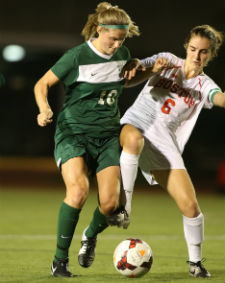 D Caprice Dydasco, UCLA – It was UCLA’s biggest road test of the season, and the Bruins passed with flying colors, winning 1-0 and 6-0 against Washington State and Washington respectively. Dydasco played all 180 minutes and chipped in three assists in the win over the Huskies on Sunday.

M Cheyenne Spade, Tennessee – Thursday’s SEC finale was a do-or-die for both the Volunteers and Ole Miss, as the winner advance to this week’s conference tournament. With the scored tied at 2-2, Spade nabbed the game-winning goal in overtime to clinch a spot in the SEC championships and keep NCAA tournament aspirations alive.

M Daphne Corboz, Georgetown – In her final regular season game for the Hoyas, Corboz had a hat trick to inspire an 8-0 romp against Seton Hall.

M Alexa Ben, DePaul – It was a banner weekend for the Blue Demons, which captured its first ever Big East regular season, and the freshman Ben was once again a big part of another win, as she scored and assisted in the 2-0 win against St. John’s(m).

M Lo’eau LaBonta, Stanford – After bagging the game-winning goal in a 1-0 defeat of Oregon, LaBonta scored two and had an assist as the Cardinal stormed past

M Carlyn Baldwin, Tennessee – The freshman midfielder scored her first career goal from the penalty spot and also added an assist in the massive 3-2 overtime win for the Volunteers.

F Katie Johnson, USC – Needing a pair of wins on the road, Johnson delivered for USC, scoring a goal apiece against Washington and Washington State as the Trojans took a step closer to an NCAA tournament bid.

F Corey Delaney, Dartmouth – The forward scored both goals in a massive 2-0 win against Harvard on Saturday, leaving the door open for the Big Green to win the Ivy League title.