Women's Team of the Week: October 15 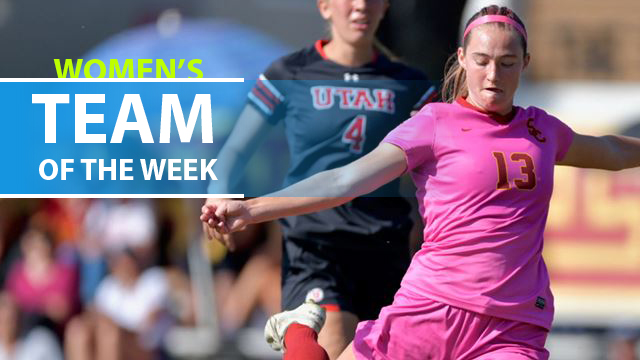 Even if USC couldn’t best Stanford earlier this season, the SoCal side is keeping up with the Cardinal.

Hosting Utah and Colorado this past week, USC came away with a pair of 2-1 victories. And it was the latest Player of the Week to help the Women of Troy to those wins.

Tara McKeown scored twice against the Utes, including the winning goal in overtime from a free kick. She then setup Penelope Hocking’s first tally against the Buffaloes, and then nabbed the winner again in a 2-1 win.

Below are some of the other top performances spotted over the past week of action in Women’s DI soccer.

GK Brooke Heinsohn, Duke – It was a good week for the Blue Devils, which saw the offense break out in a big way on Sunday. Heinsohn stood tall on Thursday, making eight saves in a 0-0 draw against North Carolina. She then back-stopped a 4-1 win against Clemson, making five saves in the win.

D Zoe Morse, Virginia – Morse played every minute over the past week in two shutouts on the road. The first was a 0-0 draw against NC State, and then she helped UVA to a 1-0 road win against Florida State, keeping the Seminoles to just four shots on target.

D Lucy Parker, UCLA – After an early Pac-12 dip, the Bruins are back close to their best. Parker played 90 minutes, leading the defense to a pair of shutout wins against Colorado and Utah at home. She scored a goal and assist against the Buffaloes as well.

D Elise Hawn, Oklahoma State – The senior center back kept the Texas attack off the board, as Oklahoma State won on the road to take over first place in the Big 12 with a 2-0 win.

D Maureen Kennedy, Bowling Green – Kennedy was instrumental in a pair of MAC wins last week. She had an assist in a 3-2 win against Central Michigan, and found the back of the net in a 2-1 win against Eastern Michigan.

M Mikayla Colohan, BYU – It was a huge week for Colohan in front of goal. She had a combined two goals and four assists as the Cougars blew out Pepperdine and Pacific by scores of 5-1 and 6-0.

M Ameera Hussen, Washington – A blast from range sealed a 3-2 win for Washington on Sunday against Arizona. The Huskies swept the Arizona schools, beating Arizona State 1-0, with Hussen logging 65 minutes in that win.

M Jamie Fankhauser, Charlotte – The senior stepped up in a big way over the weekend, tallying both game winners as Charlotte took over first place in the Conference USA standings. She scored twice in a 4-2 win against Southern Mississippi and the third goal in a 5-2 win against Middle Tennessee.

F Tara McKeown, USC – Needing McKeown to step up this season with Savannah DeMelo likely out for the year, the junior has done that. Her two goals and one assist give her 12 and seven this season, with the former already more than she had scored her first two seasons of college soccer combined.

F Sabrina Bryan, Hofstra – With two wins in CAA play, Bryan took control of the regular season race. Bryan’s play had plenty to do with it, as she score the eventual winner in a 3-1 victory against James Madison, and followed that up with a goal and assist in a defeat of Delaware.