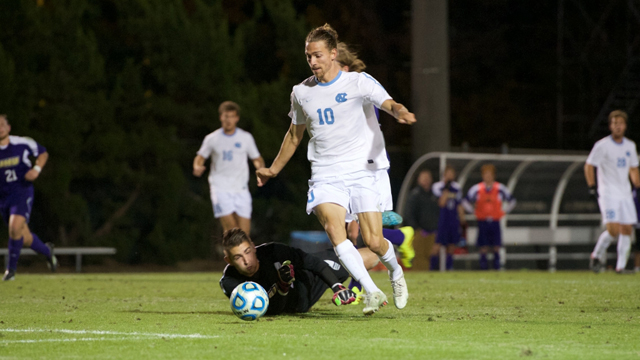 The NCAA Tournament is underway with the first two rounds already in the books. There were plenty of standout individual performances from the opening rounds as players fought to keep their seasons alive.

GK Sven Lissek, Furman: Lissek made two saves in the penalty kick shootout victory over UAB in the first round. He followed that up with seven saves over 110 scoreless minutes against Washington to push that game to another PK shootout. Lissek stopped two of the first three shots from the spot, but Washington still managed to advance with a 6-5 win in PKs.

D Zachary Carroll, Michigan State: The center back scored the game-winner against Oakland in the second round. Carroll’s header plus his play on defense helped the Spartans advance to the Sweet Sixteen.

D Tim Kubel, Louisville: The freshman right back had a goal and an assist in the 2-1 win over Saint Louis in the second round. Kubel scored the game-winner with under four minutes left in the game, which was his seventh goal of the season for the Cardinals.

D Scott Thomsen, Virginia: Thomsen had a pair of assissts against UNCW in the Cavaliers 3-1 win in the second round of the NCAA Tournament. Thomsen helped lead the Virginia squad, which was without the services of captain Eric Bird.

M Malcolm Harris, UMBC: Harris scored the game-winner against Maryland in the second round upset for the Retrievers. Harris was a key piece of the UMBC game plan in both of the NCAA Tournament victories. The midfielder was disruptive against Maryland and clean with possession as the Retrievers created chances to put the game away late.

M Leo Stolz, UCLA: Stolz scored both goals for the Bruins in their 2-1 overtime win over San Diego in the second round. Stolz’s free kick was one of the best goals of the tournament so far.

M Dominik Machado, Providence: The sophomore midfielder scored two goals in the 3-0 win over Dartmouth in the second round of the tournament. Machado’s third and fourth goals of the season put the game out of reach.

F Matt Vasquenza, Xavier: The freshman forward has been a key part of Xavier’s historic run. Vasquenza provided assists on both goals in the first round game. He scored the opening goal against Indiana in the second round.

F Cameron Iwasa, UC Irvine: Iwasa scored two goals against UNLV in the first round of the tournament. He followed that up with a great assist to Michael Sperber in overtime for the game-winner against UC Irvine in the second round.

F Tyler Engel, North Carolina: Engel scored both of the Tar Heels goals on Sunday in a 2-1 upset victory over Charlotte. Engel’s first goal came from a ridiculous angel after a sublime move near the touchline.

F Andy Craven, North Carolina: The senior forward had three goals and an assist in the 6-0 thrashing of James Madison in the first round of the NCAA Tournament. Craven added another assist on Sunday in North Carolina’s 2-1 win over Charlotte.