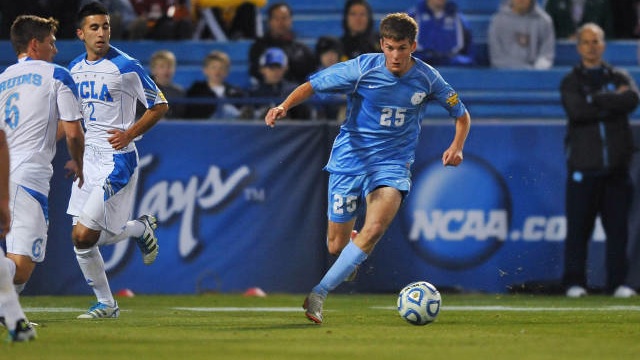 The TopDrawerSoccer.com Men’s Team of the Week is back with a postseason edition taking stock of the third round of the NCAA tournament. Which means a team chock full of huge performances on the biggest and most pressure-packed stage in the college game.

This week’s player of the week is none other than North Carolina senior forward Rob Lovejoy, who scored both of the Tar Heels’ goals to lead the team past Clemson and into the final eight. North Carolina is one of just two unseeded teams left in the dance, and it’s just one win away from the College Cup. The only trouble? UCLA, the highest seeded team left in the tournament, awaits them in the next round.

Here’s a look at the full TopDrawerSoccer.com Men’s Team of the Week.

GK Billy Heavner, UMBC – The Retrievers are one of just two unseeded teams to make it through the third round, and a defense that hasn’t surrendered a goal in the tournament is the leading reason why. The beating heart of that back line is Heavner’s presence between the pipes. He marked up four saves in UMBC’s 1-0 win over a Louisville with plenty of attacking talent.

D Jeff Kilday, Providence – The Friars’ remarkably poised back line only let in UC Irvine for two shot attempts on target in a 1-0 third-round win, and Kilday’s effort was inescapable. Providence is in the Elite 8 for the first time in its history, and Kilday’s defense is two-for-two on shutouts.

D Chase Gasper, UCLA – Gasper’s versatility makes him a unique talent along the back for UCLA, and his effort in the Bruins’ 3-2 win over Cal in the third round helped UCLA inch closer to the College Cup. While his back line did let in a pair of goals, albeit against the nation’s top attack, he added one himself to help the Bruins get through.

D Joshua Yaro, Georgetown – There’s little question Yaro is the best defender in college soccer right now. So when the Hoyas got past another opponent, this time a 2-1 win over Syracuse, you can bet the sophomore defender was in the thick of things. He clocked in 94 productive minutes in Georgetown’s impressive East Coast triumph.

M Connor Hallisey, California – Cal put up a heck of a fight in a 3-2 loss to UCLA to drop out of the tournament with some pride. No Golden Bear had his fingerprints on the game as much as Hallisey did. The senior was involved in both of Cal’s goals. He scored the first to cut the Bruins’ lead in half to 2-1, and he set up Stefano Bonomo for slice it to 3-2 for a frantic finish to his college career.

M Nicko Corriveau, Virginia – The shocker of the weekend was Virginia’s 1-0 win over defending national champs and No. 1 seed Notre Dame on the road. The game was contested in frigid conditions, and it looked like it’d be headed to overtime when Corriveau popped up with the winner with less than 10 minutes left. Can the lowest seeded team in the field pull off another?

M James Moberg, Washington – A heartbreaking loss in penalties to Michigan State shouldn’t mask a tremendous effort from the Huskies, who held a 2-0 lead with 15 minutes left in regulation. Moberg was responsible for the first of those goals, and his tireless and creatively inspired effort in the midfield gave the junior a solid launchpad into the offseason.

M Leo Stolz, UCLA – Pumping up Stolz’s bonafides at this point in the year may sound redundant, but the senior German playmaker keeps coming up with big games. On Sunday he had a pair of assists as the Bruins stormed past Pac-12 foe California 3-2. Stolz is playing his best soccer right now, which is bad news for the rest of the tourney field.

F Rob Lovejoy, North Carolina – Aside from UMBC, North Carolina was the only other unseeded team to advance to the quarterfinals. The Tar Heels got there with a 2-1 win over No. 7 seed Clemson, and Lovejoy was responsible for scoring both goals. He got his first early in the first half, and after Clemson equalized he scored the winner with 20 minutes to play. Efficiency was key; he scored on his only two shots on goal.

F Tim Kreutz, Michigan State – The Spartans were jubilant after a thrilling come-from-behind victory saw them past a tough Washington side at home. The Huskies appeared to gave it in the bag before Kreutz, who played 106 minutes, popped up with the tying goal with two minutes left in regulation. After a win in PKs, Michigan State is still alive.

F Fabian Herbers, Creighton – The Bluejays spent some time at No. 1 earlier this season, and Herbers’ play has been crucial in their postseason run. Herbers scored the opening goal in Creighton’s eventual 2-1 win over Xavier, and his outsize influence was impossible to miss for a Creighton team with legitimate designs of making the College Cup.