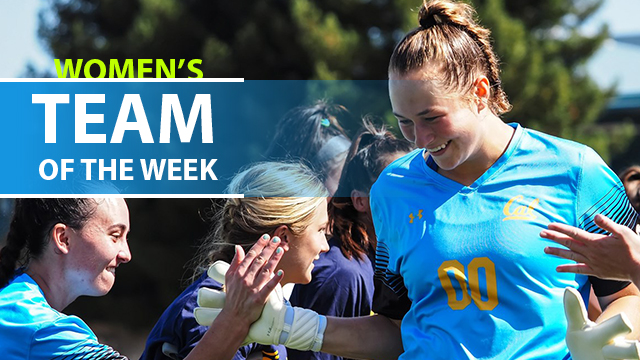 While California’s turnaround season doesn’t boil down to the addition of just one player, freshman goalkeeper Angelina Anderson has made a huge difference.

The U.S. youth national team veteran has slotted in seamlessly for the Golden Bears this season, and over the weekend, backstopped a 3-0 win against USC.

Anderson made six saves, including a couple of stops with scores locked at 0-0 in the first half. She did get a touch of luck as USC’s Tara McKeown also hit the post, but her Player of the Week performance went a long way in laying the foundation for Cal’s huge win.

Below are some of the other top performances from last week’s in Division I women’s soccer.

GK Angelina Anderson, California – Cal’s performance is obviously not down to one player, but Anderson’s helped the back line lift its game by providing such a security blanket at the back. The win over USC puts Cal’s NCAA tournament hopes on solid ground.

D Cameron Brooks, Texas – Making her first start of the season and first appearance since October 3, Brooks scored the game-winning goal and had an assist as Texas picked up a huge 2-1 win on the road at Baylor Friday night.

D Brianna Blethen, South Florida – The senior defender helped lift her side to a pair of AAC wins. First, a 2-1 win against Connecticut, and then notched an assist and helped her side keep a clean sheet in a 2-0 win against Temple on Sunday.

D Natalie Newell, North Texas – A senior for the Mean Green, Newell played the full 90 in a pair of shutout Conference USA wins against Western Kentucky and Marshall. She scored a goal and assist in the win against the Herd.

D Annika Schmidt, Butler – Thanks in part to a stout defensive effort, Butler kept the Hoyas within two points of Xavier and three of the Bulldogs with a 0-0 draw. The defender played 110 minutes, limiting the Hoyas to just a single shot on goal.

M Carson Jones, Elon – It was a big weekend for Jones and the Phoenix. She tallied in both CAA games, keeping Elon within a point of first-place Hofstra. Jones scored the her side’s opener in a 2-1 win over Charleston, and then the winner in a 3-2 win over James Madison.

M Katie Lockwood, Campbell – The midfielder injected tremendous offense from the Campbell bench in a pair of significant Big South wins. She scored and added an assist in a 2-1 win over Lockwood, and bagged the game winner against Radford.

M Leah Cernicky, Lipscomb – With two goals and an assist against NJIT, Cernicky helped keep the good times rolling for Lipscomb. She also played 83 minutes in a 2-0 win against Stetson, as the Bisons extended their winning streak to four in a row.

M Celia Story, Brown – Back in action for the first time since September 22, Story scored a goal and was lively in her shift off the bench as the Bears won a wild 4-2 encounter against Harvard. The victory shores up Brown’s chances of winning the Ivy League.

F Meghan McCool, Virginia – A hard-working senior in the midst of a strong campaign, McCool hit a new career high in goals scored with her 10th on Sunday in a 3-0 win against Notre Dame (the winning strike). She also chipped in an assist as UVA kept its unbeaten season alive.

F Grace Yochum, Oklahoma State – It was a huge week of production for the sophomore from Texas. The Cowgirls made a two-game swing to West Virginia and Iowa State, and emerged with six points thanks in large part to Yochum. After bagging the winning goal in a 2-1 win over the Mountaineers on Thursday night, she scored a hat trick in a 3-0 victory against the Cyclones.