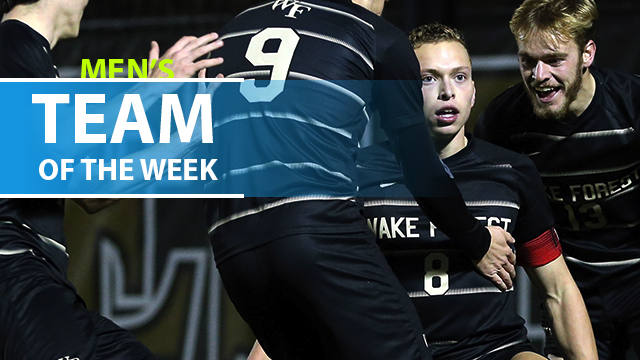 At this stage of the season, one goal can be all a team needs to win.

For a team known for its offensive prowess over the past few seasons, it was something of a surprise to see Wake Forest return to the College Cup on the back of a 1-0 win in Saturday’s national quarterfinal.

It was right back Alistair Johnston playing the role of the hero, as he found a way to score the winning goal – and earns the final Men’s Player of the Week award for the 2019 season. Dribbling through traffic on the cusp of halftime, Johnston slotted home the game’s only goal after beating a few UC Santa Barbara defenders.

Johnston helped keep the Gauchos offense silent in a closely-contested affair, as the Demon Deacons return to the College Cup for the first time since 2016.

Check out some of the other impressive performances from the NCAA tournament quarterfinals.

GK Andrew Pannenberg, Wake Forest – Prior to this season, Pannenberg had made just one start in college soccer. In Saturday’s quarterfinal, he came up huge on a couple of occasions with the score tied at 0-0. He made a quality kick save on Thibault Candia after a Wake Forest giveaway, and somehow had the right position on a Noah Billingsley header.

D Alistair Johnston, Wake Forest – Johnston’s first goal since October 8 against High Point was a clutch moment from the senior, who will look to deliver again Friday night against Virginia.

D Tanner Beason, Stanford – Having missed a big chunk of the season, Beason continued to show how crucial he is to the Cardinal. Along with keeping the Clemson attack at bay, Beason scored the opening goal from a set piece and converted his penalty to once again keep Stanford alive.

D Holland Rula, Wake Forest – Needing a lockdown defensive performance from Rula’s left back spot, the Alabama native delivered in a 90-minute shift. After a couple of nervy moments where Pannenberg came up big, Rula played the whole 90 for the first time since September 21.

M Gabriel Costa, SMU – The Mustangs threw everything they had at Virginia, coming up just short in overtime. Costa was brilliant just about every time he touched the ball, as he scored a goal from the penalty spot and then setup the tying goal that pushed the game into overtime.

M Derek Waldeck, Stanford – Like Beason, Waldeck is a critical part of the Cardinal leadership group and can create from set pieces. He assisted on Beason’s goal and converted his penalty in the shootout triumph.

M Isaiah Parente, Wake Forest – A calm and crucial presence in the midfield against the pressing and harrying of UCSB, Parente provided several moments of quality under pressure to keep the ball or relieve dangerous chances.

M Jacob Montes, Georgetown – Prior to Montes’ goal from a set piece, Washington looked calm and composed, ready to lock down a famous road win. But once again the Florida native stepped up in a huge way, tying the game with a sensational strike.

M Joe Bell, Virginia – Calm as ever, Bell stepped up to the penalty spot and converted his first attempt to put UVA in the lead. And while he missed his second in overtime, he still was alert to stab home the winning goal and clinch Virginia’s spot in Cary.

F Derek Dodson, Georgetown – A marauding run and low, firmly struck shot clinched Georgetown’s return to the College Cup, the program’s first since their run to the national title game in 2012. Dodson will need to come up huge again to best Stanford.

F Daryl Dike, Virginia – The imposing striker showed how dangerous he can be even when he’s not scoring goals. Dike won both penalties on the night against SMU, which proved to be extremely crucial in his team’s ability to survive and advance.