Men's Team of the Week: December 3 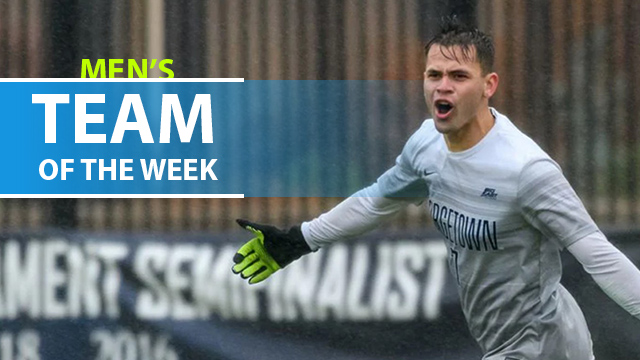 If the Georgetown attack keeps clicking like this, perhaps this is the year for the Hoyas to win it all.

Playing an ACC opponent for a second straight game in the tournament, Georgetown scored five goals at home once again. Anchoring the effort was the latest Men’s Player of the Week, Jacob Montes.

The Florida native scored two goals and setup two more, keying the team’s 5-1 win against Louisville. It sets up a mouth-watering matchup between Washington and the Hoyas, this Saturday at noon in the nation’s capital.

ANOTHER ONE FOR MONTES 😧

Check out some of the other top performers from the past weekend of action in the men’s DI tournament.

Team of the Week: November 25-December 1

GK Ben Roach, UC Santa Barbara – While the Gauchos’ shot-stopper only had to make a couple of saves against Indiana, they were obviously crucial as UCSB was the lone road team to pick up a win during the Third Round.

D Henry Kessler, Virginia – The stifling Virginia defense continues to shine at this stage of the season, blanking St. John’s in a 3-0 win. Kessler logged 90 minutes once again, laying the foundation for the Hoos’ seventh straight victory overall.

D Ethan Bartlow, Washington – A close contest turned into a solid 4-1 win against Marshall, thanks in large part to Bartlow’s two goals.

D Keegan Hughes, Stanford – The freshman defender continues to excel for the Cardinal, and this time it was contributing on the offensive end. He turned home a loose ball from a corner kick to propel the Pac-12 side to a 2-1 win against Virginia Tech.

D Andreas Ueland, Virginia – A massive center back, Ueland scored a brace from two corner kicks, and partnered well with Kessler to keep a shutout in Virginia’s win.

M Derek Waldeck, Stanford – Waldeck popped up with a goal and had a hand in the winning tally, setting up a quarterfinal clash with Clemson this Friday.

M Jacob Montes, Georgetown – With two more goals, Montes now sits at 10 on the season, far exceeding the two he’d scored in both his freshman and sophomore campaigns.

F Robbie Robinson, Clemson – The Tigers were able to hold on for a second straight overtime win, with Robinson accounting for both goals. He opened the scoring and then nabbed the winner from a penalty kick in the second overtime.

F Kyle Holcomb, Wake Forest – Having won the starting job late in the season, Holcomb’s making the most of his chances. He led the line and worked hard against a stout Michigan back line, eventually opening the scoring and adding an insurance tally in a 3-1 home win over the Big Ten side.

F Will Baynham, UC Santa Barbara – Nothing separated Indiana and UC Santa Barbara for more than 100 minutes. That is until Baynham seized onto a loose ball and unleashed a 20-yard winning wonder strike for the Gauchos.