Men's Team of the Week: November 19 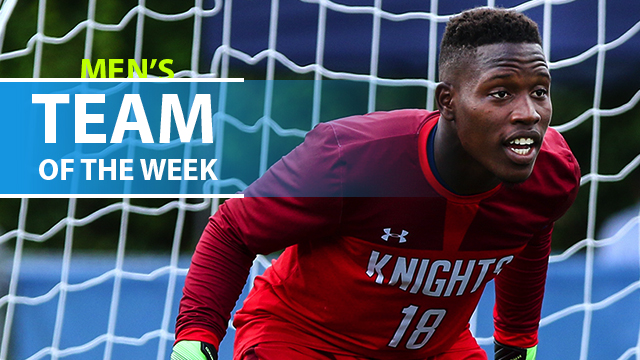 Heading into the final week of the men’s Division I soccer season, goalkeepers can be the difference between going home and an NCAA tournament spot.

That was the case for Fairleigh Dickinson, as goalkeeper Jahmali Waite helped the Knights win a pair of shootouts in the NEC tournament. His exploits land him the latest Player of the Week award.

On Friday in the semifinals, Waite kept a clean sheet across 110 minutes in a 0-0 draw against St. Francis (PA). He then made three stops in the penalty kick shootout to advance to Sunday’s final. There, he made two big saves during the game, and then a couple more stops against LIU to seal the NEC championship.

The @FDUKnights are going dancing! Jahmali Waite comes up with the clinching save in the final round of penalty kicks and the Knights are your 2019 #NECMSOC champions! pic.twitter.com/WIZfRizHY7

Check out some of the other top performances from the past week of action in men’s Division I conference tournament.

GK Jahmali Waite, Fairleigh Dickinson – For his efforts over the weekend, Waite deservedly earned the Tournament MVP honors. He has the potential to win games for FDU, something to watch when today’s bracket is announced.

D Jack Maher, Indiana – Indiana put on a dazzling display Friday night against Maryland, thwarted only from the sensational play of goalkeeper Niklas Neumann on multiple occasions. Maher got the better of him in overtime however, converting the winning penalty after a handball was called in the box. While Maher missed his PK against Michigan in Sunday’s conference tournament final, he was imperious once again as the Hoosiers didn’t concede a goal in 110 minutes.

D Henry Kessler, Virginia – The Cavaliers secured the ACC tournament championship with a 3-1 win against Clemson on Sunday. Kessler anchored the team’s back line in that game, plus a 1-0 mid-week win against Pittsburgh.

D Josh Bauer, New Hampshire – One of the best college soccer defenders, Bauer popped up to score the game-winning goal in the America East tournament final. He also helped keep two shutouts last week in wins against Hartford and Massachusetts-Lowell.

D Eddie Munjoma, SMU – Capable of playing out wide in the midfield or as an attacking outside back, Munjoma helped to lead the Mustangs to the American Athletic Conference title. He scored the winning goal on Saturday night against UCF

M Ian Rees, Campbell – Rees helped Campbell cap off its stellar 2019 campaign with a Big South title. He scored goals in both wins last week, a 3-0 defeat of Presbyterian, and a 4-1 victory against High Point.

M Pedro Dolabella, Marshall – No. 1 seed heading into the final weekend of the Conference USA tournament, Dolabella helped the Thundering Herd claim the crown. The Brazilian native nabbed the game-winning goal in Sunday’s final against Charlotte.

M Niclas Mohr, James Madison – The Dukes walked a tightrope to secure a back-to-back CAA tournament title. Mohr won it in overtime against UNC Wilmington, delivering a curling strike from distance to bag the hardware.

F Preston Judd, Denver – After an up-and-down season, Denver punched its ticket to the NCAA tournament with a pair of wins at the Summit League tournament. Judd nabbed the long goal in the final over the weekend, scoring in a 1-0 win over Omaha.

F Mauro Bravo, Iona College – The sophomore forward came through in the clutch, delivering Iona the MAAC men’s soccer title. He scored twice against No. 1 seed Saint Peter’s, including the game-winning goal in overtime.