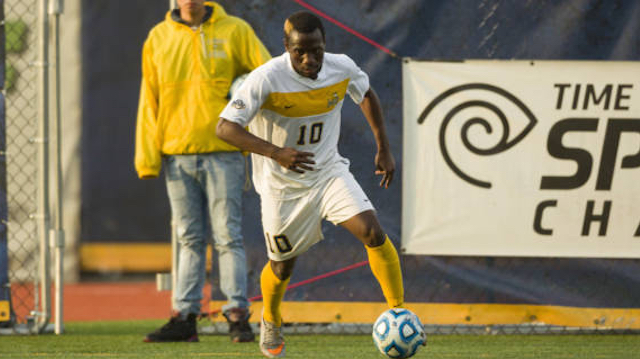 The Division I men’s regular season came to an end for some programs last week. The end of the season hoopla was a perfect showcase for some players to step up and take over. Check out which players

GK Billy Heavner, UMBC - Heavner recorded his fifth and sixth shutouts of the season over the course of the previous week. He made eight saves in a 1-0 win over UML, which helped UMBC clinch a spot in the America East playoffs.

D Koty Millard, South Carolina - The defender helped South Carolina pick up wins over two teams with higher ranking in the RPI last week. Millard drew the foul for a penalty kick, which clinched the 2-0 win over FIU. He had an assist in the 3-1 win over Old Dominion.

D Liam Doyle, Ohio State - Doyle had an assist on the lone goal of the game in Ohio State’s 1-0 win over Maryland. It was the first win over the Terps in program history. Doyle was part of an impressive defensive effort that limited Maryland to only five shots on goal.

M Melvin Blair, Canisius - The redshirt freshman tallied 12 points in two games last week. Blair matched the NCAA record for the 2015 season with eight points (three goals, two assists) in the 5-2 win over Rider. He added two more goals on Saturday in a 3-1 win over Manhattan.

M Evan Panken, Notre Dame - Panken had a goal and an assist in Notre Dame’s 5-0 win over Pittsburgh as the Irish cruised to the win in the Halloween ACC clash. Panken had the assist on the opening goal and then scored his second of the season early in the second half.

M Michael Melvin, Clemson - Melvin scored his first two goals of his Clemson career on Friday in a 4-1 win over NC State. Melvin nabbed the game-winner in the 34th minute as Clemson nab the road win.

M Stanton Garcia, SMU - Garcia tallied three points last week in the 2-0 win over Temple. Garcia scored the opening goal and added the assist on the second goal of the game as SMU clinched the top seed in the AAC tournament.

F Tobenna Uzo, Coastal Carolina - Uzo recorded four points last week as the Chanticleers picked up a win and a draw. Uzo had the game-winner in the 3-2 win over Winthrop. He had the assists on the other two goals as well.

F Abu Danladi, UCLA - Faced with a must-win game on the road, Danladi rose to the occasion for his UCLA Bruins. The talented sophomore finished the game with three assists in a 4-2 win over Akron. Danladi drew the penalty kick on the fourth goal.

F Matthew Vasquenza, Xavier - Vasquenza scored the game-winner in Xavier’s 2-1 win over Creighton on Wednesday. The sophomore striker scored the goal with just over one minute left in the game.

F Guillermo Delgado, Delaware - Delgado scored his seventh and eighth goals of the season last week in a 4-0 win over James Madison. The Spanish forward also recorded an assist in the CAA win.