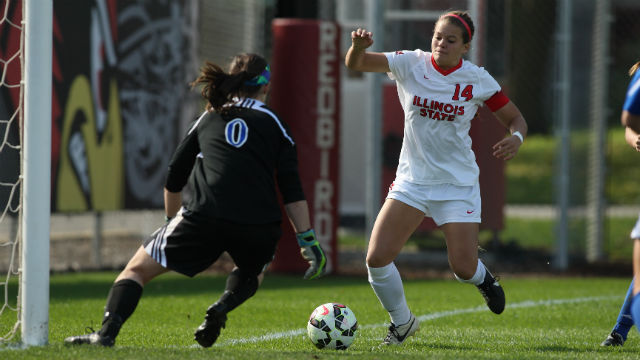 The past four seasons (including this one), Illinois State has dominated the Missouri Valley Conference.

Sunday saw the Redbirds book a fourth straight trip to the NCAA tournament, thanks once again to the TDS Player of the Week Rachel Tejada. A dominant force all four years, Tejada scored five times in two games in this year’s tournament, including once in the 2-1 MVC title game win over Evansville. 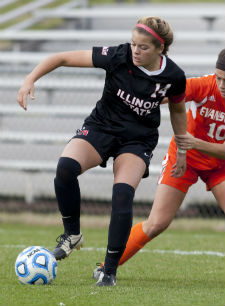 Tejada, whose terrific DI career will come to an end at the conclusion of Illinois State’s tourney run, currently sits on 72 goals, 41 assists in her four seasons.

GK Genevieve Richard, Wisconsin – Richard checks into the TDS Team of the Week for the second time this season after securing three shutouts in the Big Ten tournament. Her defense was in commanding form as she only had to make five saves in those three games, but Richard continues to be an integral part of a successful 2014 season in Wisconsin.

D Meghan Streight, Texas A&M – The Aggies secured back-to-back SEC tournament titles thanks in part to its stout defense, which didn’t yield a goal in 270 minutes of action spanning from Wednesday through Sunday. Streight played in every minute of the three wins.

D Mackenzie Dowd, Northeastern – Along with helping Northeastern keep a pair of shutouts on Friday and Sunday, Dowd scored a goal in each game, including the decisive tally in a 2-0 defeat of Hofstra to secure a CAA championship.

D Kadeisha Buchanan, West Virginia – A tremendous sophomore season continued for Buchanan, who back-stopped the Mountaineers to a Big 12 title. She played every minute across three games, as the WVU defense conceded just a single goal.

D Arin Gilliland, Kentucky – The Wildcat was everywhere in three SEC tournament games, swapping flanks and getting forward to join the attack. Kentucky played some of the best soccer over the past week on the way to the title game, where they came up short against Texas A&M.

M Carson Pickett, Florida State – The midfielder was a nuisance against both Notre Dame on Friday and Virginia on Sunday, as she scored the only goal of the game in the championship-clinching win against the Cavaliers. Her driving runs from the flank were a handful to deal with in both games.

M Gabi Iribarne, Rice – One of Sunday’s upsets took place in the Conference USA tourney final, as the Owls took down top seeded North Texas in a 2-0 win. Iribarne scored both goals in the victory to secure the NCAA tournament spot, finishing the three-game stretch with the two goals and an assist as Rice didn’t allow a goal all week.

M Erin O'Malley, Dayton – Thanks in part to the heroics of O’Malley, Dayton was able to find a way into the tournament thanks to an Atlantic 10 title. O’Malley scored twice and had an assist in three games as the Flyers edged rivals La Salle.

F Rachel Tejada, Illinois State – Recently named the MVC Player of the Year for the fourth straight season, Tejada was unstoppable over the weekend in the conference tournament, scoring five times and adding an assist as the Redbirds punched their ticket.

F Tabby Tindell, Florida Gulf Coast(w) – Tindell and the FCGU domination of the Atlantic Sun didn’t end in tournament heartbreak, as the Player of the Year delivered in the conference tourney, scoring three times, including twice in Sunday’s championship win over Kennesaw State, over the weekend.

F Charde Hannah, South Alabama – The freshman’s sensational season continued as she scored three times, including the winner in the Sun Belt Conference tournament final, a 1-0 defeat of Troy. Hannah has 20 goals to her name from 21 games in 2014.