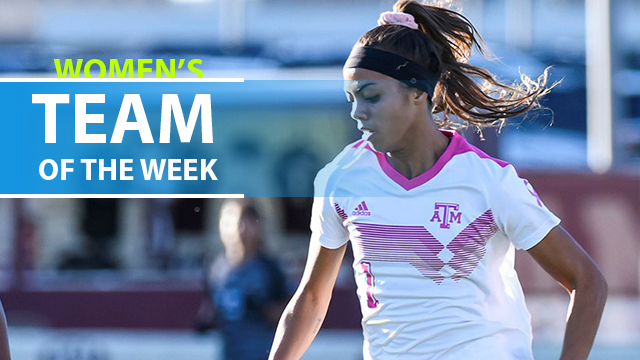 It was a week to remember for Texas A&M senior Ally Watt.

The U.S. youth international was unstoppable last week in SEC games against Vanderbilt and Missouri, earning the latest Player of the Week nod with six goals in those two matches.

Last Thursday, Watt converted a penalty on the road at Vanderbilt, and after 90 minutes the score was tied at 1-1. With under a minute left in the second overtime, Watt scored the winner, holding off a defender and lashing home the winner.

She then ran rampant back at home in College Station, smashing four past Missouri in a 5-2 win against the Tigers.

Check out some of the other top performances in Women’s Division I college soccer below.

GK Madison White, Texas Tech – The Red Raiders picked up a pair of Big 12 wins on the road, thanks in part to the play of the freshman White. She made 10 saves in a 2-0 win against Baylor, and three saves in a 2-1 win over Texas. Both victories kept Texas Tech in the running for the Big 12 regular season title behind Oklahoma State.

D Kaiya McCullough, UCLA – McCullough led the UCLA to a pair of wins at home against Washington and Washington State. She played the full 90 in both games, including a 2-0 shutout versus the Cougars.

D Grace Bahr, Xavier – Taking advantage of Georgetown’s slip up against DePaul, Bahr help Xavier take a step closer to a potential Big East regular season title. She scored and setup the game winner in a 2-1 win at Marquette, before helping to shackle DePaul in a 2-1 victory on Sunday.

M Hannah Adler, Denver – It was a massive weekend for the Denver attack, which bagged a total of 11 goals across two games, both wins over North Dakota and Purdue Fort Wayne. The senior midfielder scored two and assisted on two other tallies.

M Lucy Porter, Hofstra – Porter and Hofstra’s brilliant season continued, as they locked up the No. 1 seed in the CAA conference tournament. She scored twice in a 5-1 win over Towson, and then got her name on the score sheet again with a pair of assists against William & Mary.

M Thais Reiss, North Florida – The Brazilian midfielder put in a huge performance last week, scoring a goal and setting up two other goals in a 4-0 win over Stetson. Back home against Jacksonville, she also found the back of the net and had an assist.

M Hannah Friedrich, Saint Louis – Friedrich continued to play well for the Billikens in the final third. She scored the first two goals of the game and notched an assist in a 4-0 defeat of Richmond, and followed that up with the winning strike against

M Ricarda Walkling, NC State – The Wolfpack are trending up at the business end of the season, with Walkling helping her side to two more ACC wins. She scored the winning goal on Sunday against Notre Dame, after setting up a pair of goals in a 3-2 win over Syracuse.

F Ally Watt, Texas A&M – In just two games, Watt nearly doubled her season goal total. Her six tallies bring her to 14 on the year, just one behind her career high of 15 set last year as a junior.

F Jada Talley, Arizona – A massive week for Talley helped the Wildcats to a sweep against the two Oregon schools. Talley scored twice and assisted on two more in a 5-2 win against Oregon. She also scored a brace in a 2-1 victory over Oregon State.

F Kelsey Turnbow, Santa Clara – The junior scored a goal in each game last week, leading the Broncos to WCC wins over Pepperdine and Gonzaga.