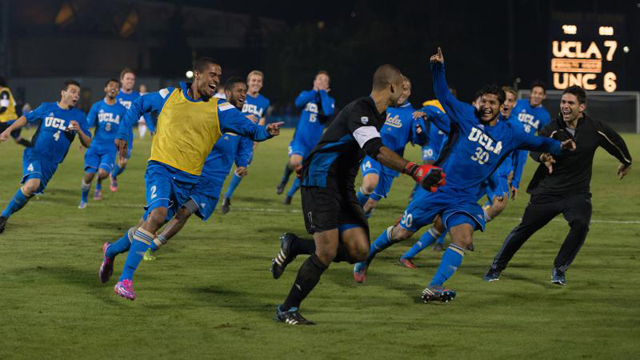 The quarterfinal round is in the books and there are only four teams left in the hunt for the Division I men’s soccer championship. There were plenty of noteworthy performances from the four games.

GK Keasel Broome, Providence – Broome is the only goalkeeper moving onto the College Cup that wasn’t involved in a shootout in the previous round. Broome hasn’t had to face a shootout all season because he has been there when called upon and helped Providence hold onto leads late. Broome had six saves in the 3-2 win over Michigan State on Saturday. A couple of the saves were remarkable and a major reason why the Friars are headed to their first College Cup.

D Oumar Ballo, UMBC – Billy Heavner only made one save against Creighton on Friday. The UMBC defense in front of him took care of the rest. Ballo led the line and was the stonewall that the Jays could not fly over. Ballo popped up everywhere to stop the Creighton attack and keep Heavner from being called into action. Ballo is a major reason why the Retrievers have yet to let in a goal during this magical College Cup run.

D Joshua Yaro, Georgetown – The Hoyas came up short on Saturday, but Yaro had another amazing performance for the Big East squad. Yaro kept a talented Virginia squad at bay for 89 minutes, but it just was not enough for the Hoyas to advance to College Cup.

D Sheldon Sullivan, Virginia – With the clock ticking down and the season looking like it was about to come to a close, Virginia defender Sheldon Sullivan delivered a cross into the box that Riggs Lennon knocked down for Todd Wharton’s game-tying goal with 53 seconds remaining. Sullivan was more than a bit piece though. He played every minute for the Cavaliers, which held Georgetown to only four shots on goal in the game.

D Chase Gasper, UCLA – The freshman left back stepped up and drilling the winning penalty kick for the Bruins. After giving up the foul that led to North Carolina’s opener earlier in the game, Gasper responded well and put in an impressive shift that ended with an assist on Brian Iloski’s goal.

D Vincent Keller, Creighton – The junior defender had a strong game on Friday against UMBC. He missed on his lone shot of the game, but he provided a couple of golden chances late with some exquisite passing. Keller also helped keep the UMBC attack out of the net with only three shots on goal for the visiting side.

M Omar Holness, North Carolina – The Tar Heels had to play down a man for nearly 90 minutes after a red card to Alex Olofson in the 20th minute put the ACC squad behind the eight ball. Holness was a major reason why UNC was successful despite playing down a man. He was the cog in the center of the field for the Tar Heels. He also struck a wonderful free kick to give UNC the lead and put more pressure on UCLA. Holness added an assist late on the game-tying goal.

M Todd Wharton, Virginia – Wharton did not have many options. He had to jump into the attack with the seconds counting down on the Virginia season, but he timed his run to perfection and put away the chance that tied the game. Wharton was involved all game and he was a crucial part of the Virginia game plan with Eric Bird still out with injury.

F Fabio Machado, Providence – The senior forward bent his shot into the corner of the net for the game-winner against Michigan State. It was well-placed finish in a situation where most players would have tried to hit the ball with all of their force. Machado’s precision is the reason that the Friars went into East Lansing and left with a win.

F Kay Banjo, UMBC – Banjo converted the game-winning penalty kick to send UMBC to College Cup. He was the main weapon up top for the Retrievers against Creighton, but he couldn’t break free of the Jays defense and only managed two shots on the game. But when all the pressure was on, Banjo was composed enough to pick out his spot and put UMBC on the map.

F Abu Danladi, UCLA – Danladi was involved in all three goals for the Bruins in a 3-3 draw against North Carolina. UCLA advanced on penalty kicks to book a spot in College Cup. Danladi’s goal, which was the third of the game, came on a mesmerizing sprint from over half field after he beat a defender and then the goalkeeper. He was the difference on the day for the Bruins.