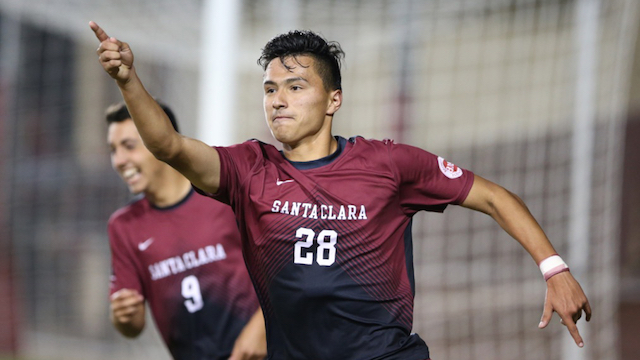 The standouts of the conference tournaments over the weekend took the majority of the spots on the TDS Team of the Week, but the Player of the Week went to an individual in a conference without a tournament who led his team to victory in a must-win game on the final day of play.

Find out which players made the difference in the bid to the make the NCAA Tournament.

GK Sven Lissek, Furman/Dakota Niedermeier, Maryland - The two goalkeepers both put up ridiculous performances for their respective programs. Lissek was named the SoCon Tournament Most Outstanding Player after coming up with a huge save in the PK shootout in the semifinal and then making six saves in the championship game. Niedermeier made four saves in the penalty kick shootout against Indiana in the semifinal. He made a highlight-reel save in the championship against Ohio State. He was named the Defensive Most Valuable Player for the Big Ten Tournament.

D Joshua Yaro, Georgetown - Yaro was named the Most Outstanding Defensive Player of the Big East Tournament after his standout play for the Hoyas. Yaro’s interception in the overtime helped setup the game-winner for Georgetown in the title game against Creighton.

M Amass Amankona, Dayton - The A-10 Player of the Year pulled off the double on Sunday when he was named the Most Outstanding Player of the Conference Tournament. Amankona notched three goals in three games as Dayton clinched the title.

M Lesley Nchanji, Tulsa - The talented freshman was named the Most Outstanding Offensive Player of the AAC Tournament. Nchanji’s play helped Tulsa cpture the tournament title and clinch the automatic berth to the NCAA Tournament.

M Joseph Holland, Hofstra - Holland scored the second goal of the game in a 2-0 win over Delaware in the CAA Championship. Holland was named the CAA Tournament Most Outstanding Player. On top of his contributions in the attack, he also helped with the defense that did not allow a goal during the tournament.

M Kyle Whigham, Drake - Whigham was the 2015 MVC Tournament MVP after his stellar play throughout the event. He helped lead the Bulldogs to three shutouts on the way to claiming the tournament title.

F Carlos Delgadillo, Santa Clara - The sophomore sensation was prolific in a must-win game for the Broncos. Delgadillo scored two goals and added an assist in a 3-0 win over San Diego as Santa Clara escaped long odds and won the WCC on Saturday. It was an unreal performance from the forward in a crucial game.

F Brian Wright, Vermont - Wright scored his 10th goal of the season on Sunday as he helped Vermont capture the America East Championship. Wright was named the Most Outstanding Player of the Tournament.

F Ben Polk, Syracuse - Polk scored the only goal in the ACC Tournament final as Syracuse capture its first ACC Crown and first conference title since 1985. Polk was named the MVP of the tournament after scoring three goals in the final two games.

F Jamie Luchini, Lehigh - Luchini was named the Patriot League Tournament MVP after recording eight points in three games. The senior had three goals and two assists during the tournament including two goals in the final as Lehigh claimed the conference title.