Women’s Team of the Week: November 12 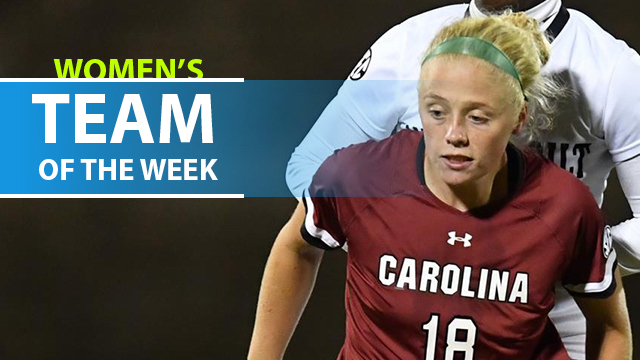 Winning the SEC tournament these days is no easy feat.

The combination of playing three games over the span over six days, and an ever-improving field makes it a tough task in one of the nation’s best conferences.

But South Carolina stepped up, shutting out Georgia, Vanderbilt and Arkansas on the way to a tournament triumph on Sunday. Tournament MVP Grace Fisk is the latest Player of the Week, as South Carolina preps to play in this year’s NCAA Tournament.

Fisk led a defense that didn’t concede a goal in any of the three wins, capped off by a 1-0 against Arkansas. During that three-game stretch, goalkeeper Mikayla Krzeczowski faced just six shots in three games.

Below are some of the other top performances over the past week in women’s DI soccer.

GK Sarah Peters, Kansas – The Big 12 tournament winners received a huge boost from Peters, who secured the event’s Defensive Most Outstanding player. She made critical stops in Friday’s 2-1 win against Oklahoma State, and then kept the shutout in Sunday’s final. It was the first conference tournament title in program history.

D Grace Fisk, South Carolina – Fisk played every minute of three shutout wins for the Gamecocks, which are unbeaten in 13 games and a dark horse College Cup contender.

D Grace Bahr, Xavier – A memorable season for Xavier was capped off with the Big East automatic conference bid. Bahr helped keep shutouts against Villanova and Georgetown, while setting up both goals in the win against the Hoyas on Sunday.

D Dominique James, North Texas – While the Mean Green needed a little bit of help from its offense to secure the Conference USA tournament crown, James did play every minute of all three games. She picked up Defensive MVP honors and looks to lead North Texas on a run in the NCAA tournament.

D Kaleigh Riehl, Penn State – The central defender led the Nittany Lions to the Big Ten tournament title. She played every minute in wins against Purdue and Michigan, and in the final against the Wolverines, eclipsed the record for most DI NCAA minutes by a field player. Riehl surpassed Becky Sauerbrunn for the mark.

M Lucy Porter, Hofstra – Porter and the Pride made it three straight NCAA tournament bids with a 5-1 win against James Madison. The English midfielder scored twice and setup another goal.

M Courtney Reimer, Saint Louis – The senior midfielder scored a critical goal against La Salle on Friday, ensuring that the Billikens would advance to the Atlantic 10 title game. She nabbed the lone goal in a 1-0 win, before playing 90 minutes in Sunday’s championship games against George Washington.

M Ashley Sanchez, UCLA – Another player to hit the record books over the weekend, Sanchez had two helpers in UCLA’s 4-2 win against cross-town rivals USC. That gives her 39 in not even three seasons in Westwood, the most in UCLA women’s soccer history.

F Haley Johnson, Wisconsin-Milwaukee – On the way to picking up Horizon League tournament MVP honors, Johnson scored in both games last week. She nabbed the winner in a 2-1 win against Oakland, and provided the insurance strike in a 2-0 championship game win over UIC.

F Raimee Sherle, Boise State – The 2019 season’s been another impressive campaign from the speedster from Idaho. And she delivered in the clutch once again, scoring four goals in two Mountain West tournament games, victories over New Mexico and San Diego State.