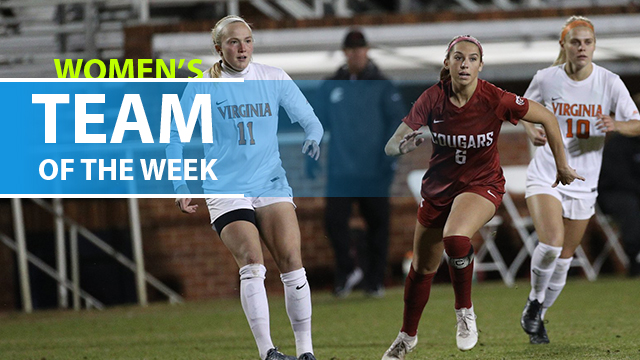 If not for Washington State, the women’s Division I Elite Eight field could’ve been four No. 1 seeds and four No. 2 seeds matching up for a spot in the College Cup.

The Cougars traveled all the way from Pullman to Charlottesville, securing the upset of the tournament so far with a wild 3-2 win against the Cavaliers on Friday night.

It was Morgan Weaver, the penultimate Player of the Week, that helped lead the Pac-12 side to win. She scored and setup another goal in the win against Virginia. Weaver followed that up with a two-goal effort against West Virginia in Sunday’s Sweet 16 match, propelling the Cougars to the Elite Eight for the first time in program history.

Next up for Washington State is a trip to South Carolina over Thanksgiving and a chance to make it to the 2019 College Cup. See some of the other top performances from last week’s second and third round action below.

GK Kaylie Collins, USC – The junior is back in goal after missing a big chunk of the regular season, and her performance in Friday’s game against Texas A&M played a huge role in USC playing through the weekend. She made seven saves in a narrow 2-1 win, before seeing off Santa Clara in a 1-0 victory.

D Grace Fisk, South Carolina – Another impressive performance for Fisk and the South Carolina defense saw the Gamecocks secure two more shutouts last week. Fisk even scored the winning goal in Sunday’s 2-0 defeat of Kansas, as the SEC side nears a return to the College Cup.

D Kaiya McCullough, UCLA – The Bruins put together two impressive performances against Clemson and Wisconsin on Friday and Sunday. McCullough anchored a defensive effort and two clean sheets, going the full 90 minutes in both games.

D Kiki Pickett, Stanford – No team can match what the Cardinal attack is doing at the moment. But spare a thought for the defense as well, which hasn’t conceded a goal this tournament. Pickett and the Stanford back line conceded just one shot against Penn State on Sunday, and the outside back contribute a pair of assists in a 4-0 second round win over Hofstra.

M Jaelin Howell, Florida State – Playing without a deep bench, Florida State has the talent to strangle games, and it’s Howell that helps lock things down in the midfield. Her runs into the box are also crucial, however, and she scored the tying goal in Sunday’s 2-1 come-from-behind win over South Florida.

M Mikayla Colohan, BYU – Can the Cougars go to Palo Alto and shock the world? They have the offense to give Stanford something to think about, even if stopping Cat Macario seems impossible. Colohan scored twice in Thursday’s win against Louisville, and setup another goal in the 3-0 defeat of NC State.

M Emily Fox, North Carolina – The Tar Heels are riding high heading into the quarterfinals, picking up a 1-0 win against Colorado on Friday and cruising to a 4-0 defeat of Michigan. Fox notched a pair of assists in the latter, as North Carolina prepares for a visit from USC.

F Catarina Macario, Stanford – Macario is smashing her way into the record books, and is now tied for the most goals in a season for a Pac-12 program, scoring her 30th on Sunday against Penn State. She’s already set the record for Stanford, and will have more on her mind come Friday when BYU visits.

F Penelope Hocking, USC – Strike partner Tara McKeown is back in the fold for USC, but Hocking’s importance to the team continues. She scored and setup McKeown’s goal in the 2-1 second round win against Texas A&M. Hocking now has 17 goals and seven assists on the year.

F Morgan Weaver, Washington State – A career year for Weaver gets at least one more game on Friday against South Carolina. Her three goals set a new season-high for the season, who now has 14 goals, eclipsing her 2018 total of 13.

F Mia Fishel, UCLA – The decorated recruit has lived up to her billing as a freshman, and is catching fire at the right time of the year. She scored three times, including the game-winning tallies in both matches against Clemson and Wisconsin. With four goals in her last four games, Fishel is going to be crucial as UCLA heads to Tallahassee with a trip to the College Cup on the line.